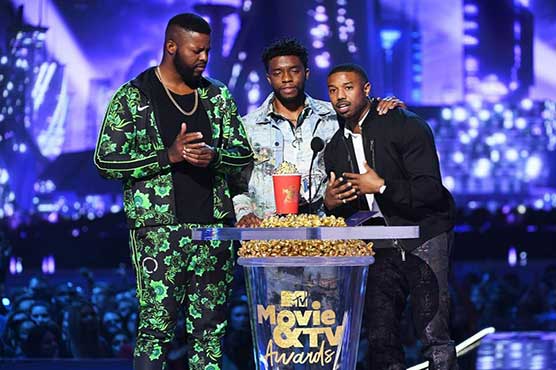 Boseman, 40, got his hero statuette from presenters, Olivia Munn and Zazie Beetz — and promptly gave it to James Shaw Jr., the man who stopped a mass shooter at a Tennessee Waffle House.

“Receiving an award for playing a superhero is amazing but it’s even greater to acknowledge the heroes that we have in real life,” Boseman said.

He beckoned the 29-year-old on stage and led the crowd in a standing ovation.

“If you don’t know James Shaw Jr., he fought off a gunman in Antioch, Tennessee, at a Waffle House. He saved lives,” he said.

Shaw singlehandedly wrestled the AR-15 semi-automatic rifle from the hands of Travis Reinking as he was allegedly reloading in the middle of a shooting rampage in April.

Four people were killed and two others wounded at the Waffle House restaurant in Nashville, America’s country music capital.

But Shaw has been credited with saving many more lives. He suffered a graze wound from a bullet and burns on his right hand from grabbing the hot barrel of the gun.

He was hailed as a hero by the survivors and their family members but has repeatedly has rejected the label, saying he acted for reasons of self-preservation.

The MTV Movie and TV Awards have been taking a sideways look at Hollywood since 1992, honouring films and their actors with “golden popcorn” statuettes.

The nominees are decided by producers and MTV executives, while the winners are chosen by the public, who vote online.

As a result, the awards have historically recognized commercial favourites, in contrast to the Oscars and other events based on critical or industry acclaim.

MTV reverted to pre-recording the show, filmed on Saturday in a cavernous hangar at Santa Monica Airport in southern California, after broadcasting live last year.

For the second year running, the prize-giving dispensed with gender distinctions in the categories and awarded Best kiss to a same-sex embrace.