HomeNationalNational Assembly to Buhari: You will be accountable for actions of your...
National

National Assembly to Buhari: You will be accountable for actions of your appointees 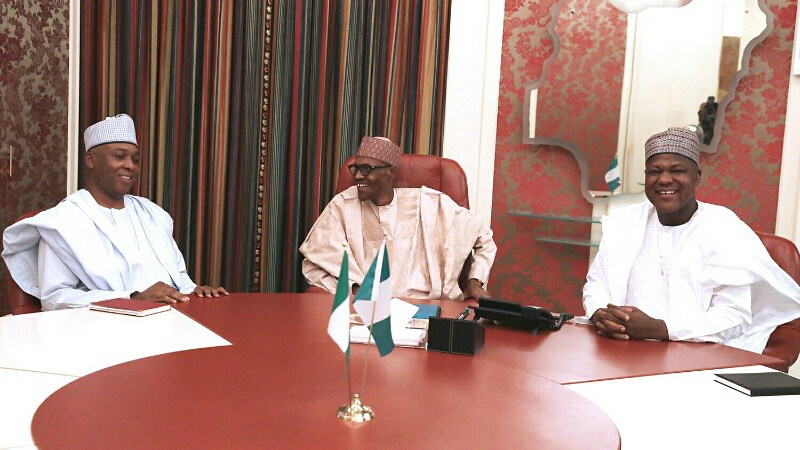 The national assembly at the end of a closed-door meeting declared that President Muhammadu Buhari must be held accountable for the actions of his appointees.

Senate President,  Bukola Saraki said this after at the end of the joint session of the national assembly on Tuesday.

The Senate president who is chairman of the national assembly said the persecution of perceived political opponents must stop.

Saraki added that the lawmakers are ready to invoke their powers against if president Buhari fails to address a number of resolutions passed at the joint session.

The joint session of the national assembly passed 12 resolutions in a meeting which lasted three hours.

At the end of the session, Saraki read the resolutions; “The joint session of the national assembly in a closed session resolved that the security agencies must be given a marching order to curtail the killings of Nigerians across the country and protect the lives and properties of Nigerians. This is the primary responsibility of any responsible government. Two, persecution of political opponents must stop,” he said.

“Three, there is the strict adherence to the rule of law and protection of all citizens. Four, the president must be held accountable of the actions of his appointees and must be ready to sanction any act which will ridicule the country and our country’s democracy.

“Five, the government should show sincerity to the fight against corruption by not being selective and also prosecute current appointees pending against them. Six, the sanctity of the national assembly protected and preserved and prosecute those who invaded the Senate to seize the mace. Elections must be competitive and inclusive [away] from the rule of fear and intimidation, particularly as we approach the forthcoming 2019 elections.

“Eleven, we also hereby reaffirm our earlier resolution of the vote of no confidence on the Inspector-general of police who does nothing but preside over killings of Nigerians and outright disregard for the constitutional authority of both the executive and the legislature. Finally, the national assembly will not hesitate to invoke its constitutional power if nothing is done address the bulk of resolutions passed today.”

The lawmakers held the session to discuss “the assault” on their colleagues by the executive.

Saraki has allegedly been named as sponsor of those behind the multiple bank robbery and killings in Offa, Kwara state.

An incident which took place on April 5 led to the deaths of 33 persons, including pregnant women and 12 police officers.

The police had invited Saraki in connection with the incident but made a U-turn following the intervention of Vice-President Yemi Osinbajo.

After a meeting between Osinbajo and Ibrahim Idris, inspector-general of police, Saraki was asked not to appear in person but explain in writing, what he knows about the robbery suspects.

A senator representing Kogi West, Dino Melaye was granted bail last month after he was taken into police custody over an allegation on gunrunning.

Another senator representing Kaduna central, Shehu Sani was invited in connection with a murder case by the police.