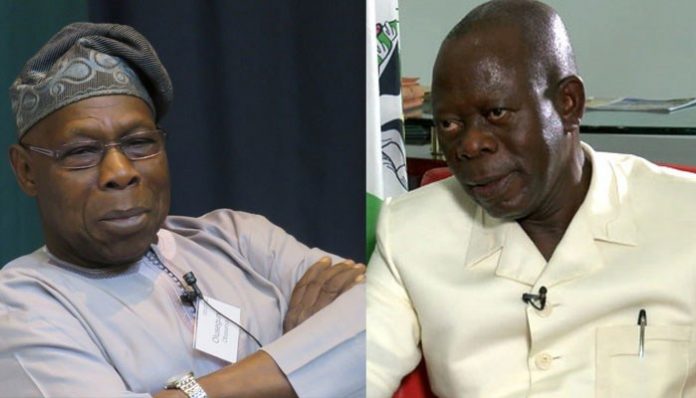 Newly elected national chairman of the ruling All Progressives Congress (APC), has asked President Muhammadu Buhari to revisit the $16 billion said to have been spent on power by former president Olusegun Obasanjo’s administration.

President Buhari had in May raise concerns and said Obasanjo had questions to answer over the alleged failed project.

“Where was the power after a former president claimed to have spent $16 billion on the project?,” the president asked.

But the Obasanjo denied any wrongdoing saying he was ready for probe.

Oshiomole speaking after John Oyegun, the ex-national chairman of the party, handed over to him, said the APC should support Buhari in the fight against corruption.

He said; “Opposition could not say he is not fighting corruption, they say it is selective and I have been reflecting on that. How can it be that what the whole world can see, the local people cannot see it as I was reflecting.

“Nigerians in their various homes that day with generator said ‘Mr President, we don’t have’. $16 billion spent on power? The more dollars spent, the more darkness. Maybe because the president has not yet proceeded to now ask the follow-up question, since we can’t find the power, you must produce the $16 billion spent.

“If he doesn’t do that, then the accusation of limited anti-corruption [fight] will begin to have some relevance. Our president needs to do the needful. He can proceed to recover the $16 billion back into the treasury from the man who superintended over the spending of that money.

“All we have to do as a party is to provide the support that Mr President needs. They want to distract attention when they are in trouble and say ‘oh they want to kill me’.”

The former Edo state governor added that since Buhari assumed power no politician of note has been murdered.