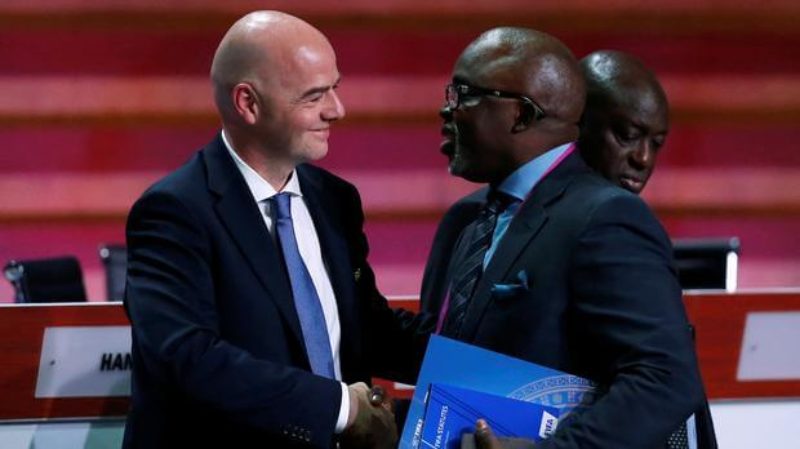 The FIFA President, Gianni Infantino has warned that Nigeria may be banned if the leadership of the Nigeria Football Federation (NFF) as recognized by the world football governing body continues to be compromised.

Incumbent NFF President, Amaju Pinnick is facing a challenge to his position from Christopher Giwa, who claims he was elected on August 2014 and, acting on the basis of an interim court order, has taken control of the NFF.

The FIFA President, however, Infantino didn’t mince his words in addressing the issue at a press conference in Moscow.

“The situation is very clear. We have statutes, we have regulations that there can be no interference in the running of the association,” Infantino began.

“For this reason, Pinnick is working here in an official capacity. He is the president recognised by FIFA, he is the president elected by the members of the Nigeria football association and that is the end of the story.

“If any external body thinks that they can change the situation, then, of course, Nigeria will risk being banned as it has happened with other countries because we have processes that need to be respected.

“The day after I become FIFA president … and suddenly there’s a presumption of guilt,” said Gianni Infantino about the challenges of being FIFA president. Getty

“It is a very clear cut and simple case as far as we are concerned,” Infantino concluded, “and we have made this very clear.

“Maybe you can help us transmit it if we didn’t come across very clear enough.”

Giwa, who has been handed a worldwide ban by FIFA, claimed that he was elected by the NFF Congress in August 2014.

FIFA refused to recognise his election, pointing to third-party interference, and when GIwa appealed to the Court of Arbitration for Sport, CAS agreed with the governing body and dismissed his challenge.