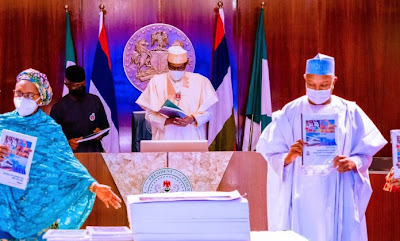 ‘‘I have no doubt in my mind that with effective and sustained implementation, Nigeria will achieve quantum leap in unlocking its potentials in all sectors of the economy for a sustainable and inclusive national development” – Buhari

President Muhammadu Buhari on Wednesday said that Nigeria needs an investment size of about N348 trillion to achieve the targets set out in its five-year National Development Plan (NDP) from 2021 to 2025.

He said the projected investment portfolio would be contributed by the government which would source for 14.3 per cent (N49.7 trillion) of the amount, while the balance of 85.7 per cent (N298.3 trillion) would come from the private sector.

The president spoke yesterday, at Abuja, during the formal launch and public presentation of the NDP, the successor to the Economic Recovery and Growth Plan (ERGP), 2017- 2020, which lapsed in December 2020.

According to him, the overall target of the plan was to achieve a broad-based real Gross Domestic Product (GDP) growth rate of five per cent on average during the Plan period; generate 21 million full-time jobs; and through an inclusive growth, lift 35 million people out of poverty.

He added that this would set the stage for achieving the government’s target of lifting 100 million Nigerians out of poverty in 10 years, under the National Poverty Reduction with Growth Strategy (NPRGS).

‘‘This implies that successful implementation of the Plan will require a strong partnership between the public and private sectors.

‘‘In this regard, a Development Plan Implementation Unit headed by the Vice President with the Honourable Minister of State, Budget and National Planning as the Vice-Chair will be established in the Budget and National Planning arm of the Ministry to ensure overall coordination with the Ministries, Departments and Agencies; sub-national governments; Private sector operators and Civil Society Organisations,’’ he said.

The president recalled that the Federal Executive Council (FEC) had on November 10, 2021, approved the Draft National Development Plan, 2021-2025, which is the first of the envisaged Medium Term development Plans to implement the Nigeria Agenda 2050.

‘‘The Plan, as a matter of deliberate efforts, is comprehensive and has the capacity not only to accelerate and sustain national development but also the attainment of various Regional and Global Agendas, including the AU Agenda 2063, ECOWAS Agenda 2050 and the UN Sustainable Development Goals, 2030.

‘‘I have no doubt in my mind that with effective and sustained implementation, Nigeria will achieve quantum leap in unlocking its potentials in all sectors of the economy for a sustainable and inclusive national development,’’ the President said at the presentation before the commencement of the weekly FEC meeting.

Commending the Ministers of Finance, Budget and National Planning, the Leaderships of the National Steering Committee, the Central Working Group and the Technical Working Groups for the sacrifice and efforts in achieving this milestone, the president stressed that the implementation of the ERGP not only helped the country to exit the 2016 economic recession, but sustained a modest growth until the advent of the recent global economic challenges occasioned by the outbreak of the Coronavirus (COVID-19) pandemic.

He said: ‘‘The sustained implementation of the ERGP ensured execution of our social investment programmes and improvement in infrastructure across the country.

‘‘In order to ensure a seamless transition and continue the implementation of the policies, programmes and projects of government, it became necessary to prepare a successor Plan to the Economic Recovery and Growth Plan.

‘‘Apart from the NSC the institutional arrangement for the preparation of the Plan also included; the Central Working Group (CWG), the Technical Working Groups (TWGs) and a strong Secretariat that supported the process.

‘‘The process adopted for the preparation of the Plan was not only participatory and consultative but also inclusive; involving all segments of the society such as; Key Political Parties; Government Agencies; Labour Unions; Youth Organizations; Civil Society Organizations; Women Society; Farmers’ Association; ALGON; Traditional and Religious Leaders and Representatives of People with Special Needs; and Development Partners.”

According to him, the broad objectives of the Plan include the establishing a strong foundation for a concentric diversified economy with robust MSME growth and a more resilient business environment as well as investing in critical, physical, financial digital and innovation infrastructure.

The president added that the Plan was also expected to build a solid framework to strengthen security and ensure good governance while also enabling a vibrant, educated and healthy population.

Presenting the Plan to the president, Minister of Finance, Budget and National Planning, Zainab Ahmed, said the plan would focus on investing on massive infrastructure, ensure economic stability, enhance the investment environment, and improve on social indicators and living conditions of Nigerians, among other targets.

She further stated that the plan was a pointer to the type of Nigeria that all Nigerians desire, adding that it would encourage the use of science, technology and innovation to drive the growth being targeted.

“In order to have the future we all desire, the plan is developed to play a sizable role in the product complexity space internationally and adopts measures to ease constraints that have hindered the economy from attaining its potentials, particularly on the product mapping space.

“The plan provides for the implementation of major infrastructure and other development projects across the six geopolitical zones and opening up of opportunities for the rural areas to ensure balanced development and increased competitiveness,” she added.

Meanwhile, the Nigeria Governors’ Forum (NGF) has hailed the Buhari’s administration for the initiative that has created the series of economic development plans so far under its watch, noting that no administration, in Nigeria’s history, had been that inclusive.

The Chairman of the Forum and Governor of Ekiti state, Dr. Kayode Fayemi, who was represented by the Governor of Kebbi State, Alhaji Atiku Bagudu, noted that the new NDP 2021-2025 was a product of collaboration and consultation between the federal and state governments.

According to him, “we congratulate Mr. President for launching the 2021-2025 Development Plan as ably introduced by the Minister of National Planning.

“We had an economic recovery growth plan that expired in 2020, which has achieved the objective of, among others, helping Nigeria exit twice from the recession and now we have a plan in place for 2021-2025 that is further aimed principally at ensuring that the gains have been consolidated and Nigerians are being continuously included.

“This government, more than any other, has taken deliberate, active steps to include all economic groups and support them more than has ever been done in order that they achieve their economic objectives, in order that the country’s economy continues to provide for all and we will witness more prosperity. We congratulate and I’m sure all of us in the 36 states and FCT are very happy.

“We have been consulted, some of us who are members of the various committees. It’s a consultative programme and we appreciate both the President and the Vice President because under them, particularly the National Economic Council, which is the major economic decision-making body of the Federation, has been quite inclusive, it’s not a monologue, states are being given the pride of place”, he further said.