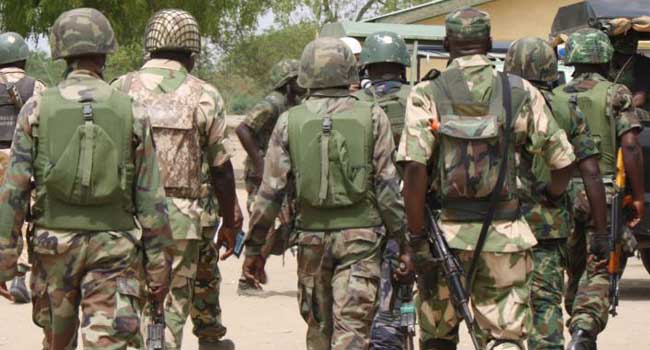 The Nigerian Army says it will go ahead with its planned military operation in the South-east.

The army, in a statement issued at about 12:42 a.m on Friday, advised Nigerians to disregard the statement by Governor Okezie Ikpeazu which gave the impression that it was withdrawing its troops from the exercise codenamed “Operation Python Dance II.”

“It’s not true that we are withdrawing the troops,” the army spokesperson, Sani Usman, said in the statement.

The Governor of Abia State, Mr. Ikpeazu, had said on Thursday that the army from Friday would commence a gradual withdrawal of troops from the streets of Abia.

“This (the governor’s remark) should not be misconstrued as withdrawing of troops earmarked for Exercise EGWU EKE II,” Mr. Usman, a brigadier general, said, adding that “The General Officer Commanding 82 Division has not said such thing.”

The army said the exercise will commence as scheduled and would run till the end of the year.

“Members of the public especially in the areas where the exercise will take place are please enjoined to go about their lawful businesses.

“We wish to also state that we would not allow any individual or group to jeopardise the conduct of the field training exercise through unlawful or criminal activities,” the army said.

The army appealed to Nigerians to support the exercise which it said was part of its constitutional duties.

It promised that the troops “would conduct themselves in the best professional manner, abide by the Rules of Engagement and Code of Conduct in line with requirements of the Constitution of the Federal Republic of Nigeria” during the exercise.

The movement of several Armoured Personnel Carriers into Umuahia, Abia State, on Sunday caused a violent skirmish between the troops and the supporters of IPOB, the separatist group campaigning for the independent state of Biafra.

The situation has prompted some Nigerians, especially those from the South-east, to condemn the military exercise as being unnecessary, provocative, and capable of leading to a more serious national security crisis.

The effect of the Umuahia incident spread to Aba, still in Abia State, where suspected members of IPOB burnt down a police station and also in Jos, Plateau State, where violence erupted between the Hausas and the Igbo community.

Meanwhile, a former attorney general in Akwa Ibom State, Victor Iyanam, has said that there was nothing wrong or unusual about the military operation in the South-east.

Mr. Iyanam said Thursday on Facebook that the military for a long time now has been a part of the nation’s security process.

“The police could never have been able to do it alone,” he said.

“Why do we pretend about the military presence in this country? How about the joint Military/Police patrols all over the country?

“Odi was levelled by the military, (and) there was applause for whatever reason. Ibrahim Zakzaky in Kaduna and his followers will not forget their encounter with the military in a hurry. Python Dance Phase1 just rounded off in Rivers State and nobody quarreled with that.

“This story of Militarisation is just not credible.

“A decision on the security situation is neither legislative nor judicial. It is the perogative of the President. The hullaballoo on militarisation is diversionary and mischievous. Buhari cannot afford to be a do-nothing President just so that he would be seen as a ‘democrat’,” Mr. Iyanam said. Premium Times