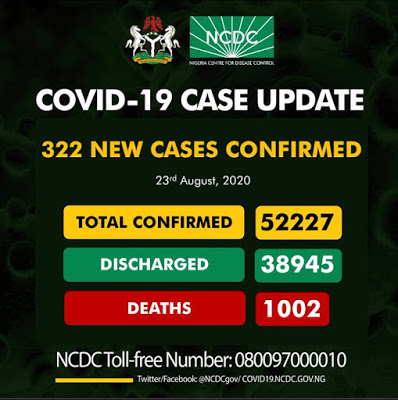 The total fatalities recorded from coronavirus (COVID-19) in Nigeria have shot over the 1,000-mark as the number of confirmed cases in the country reached 52,227.

Data from the disease control Centre indicated that 1,002 people have lost the battle to COVID-19 in the country – about six months after the first case was announced in the country last February.

The figure reported by the NCDC in its latest update on the disease on Sunday shows that five more people infected with COVID-19 died in the last 24 hours.

The nation’s disease control agency, in a late-night tweet,  announced 322 new cases of coronavirus – a figure which was 279 lower than that of the previous day.

The cases were reported from 17 states and the Federal Capital Territory (FCT), bringing Nigeria’s total infections to 52,227.

Lagos, which is the epicentre of the pandemic in the country, reported the highest number of additional infections – 130, followed by Bauchi and the FCT which have 36 and 25 more cases respectively.

However, 279 more people were successfully treated and have been discharged from various isolation centres as the country now has 38,945 recovered cases.

The total number of recovered cases represents 74.56 per cent of the total COVID-19 infections in Nigeria, while 12,280 cases are still active.

Breakdown of figures according to states