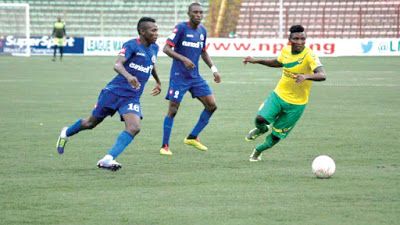 For the first time in the seven-week-old 2020/2021 Nigeria Professional Football League’s season, there was no single away win though two draws were recorded. One of the two goalless draws was in Makurdi where Lobi Stars shared the spoil with Abia Warriors.

The draw could be a temporary relief for the under-fire Coach of the Warriors, Imama Amapakabo who was given a four-match-win ultimatum. Of the mandatory four matches, he has lost two and drew two difficult matches on the road, whereas the team remains in the relegation zone – second from bottom with only three points from seven matches.

The other goalless draw was recorded in Lagos where the MFM FC and the Afonja Warriors, Kwara United of Ilorin cancelled each other out. The result improved Kwara’s standing on the log as they now occupy the sixth position with twelve points from seven games, while MFM dropped to the eleventh with ten points from the same number of matches.

All other six matches yesterday ended in favour of the home teams. The League’s top scorer, Sadiq Yusuf, Fuad Ekelojuoti and Chinedu Udechukwu all combined to score three goals for Sunshine Stars as they beat Rangers International of Enugu 3-1 in Akure, The massive win catapulted the “Owena Whales” to the top four with thirteen points. The peoples elephants, Enyimba FC of Aba are now in second position with fifteen points after beating Katsina United with a lone goal. It was also a solitary goal win for the current league leaders, Rivers United over Adamawa United who remain rooted to the bottom of the table.

In other matches, FC Ifeanyi Ubah move out of relegation waters as they beat Wikki Tourist 1-0, Jigawa Golden Stars also outclassed Heartland of Owerri in a 2-1 victory while Dakkada FC compound the woes of Warri Wolves 2-0 in Uyo.

The next round of matches come up on Wednesday, 3rd of February 2021.

ENTERTAINMENT: “What I desire is a God-fearing man” – Actress Chinenye Uyanna speaks on marriage