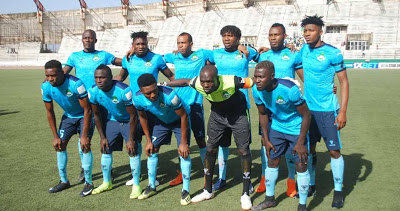 Nasarawa United had earlier stunned Heartland FC 2-1 in Owerri to record their first away victory in the 2020/21 NPFL season.

The Sunday away victory, played at the Warri Township Stadium, shot the team to the top of the summit as they hope to consolidate on their impressive runs in their next game.

Nasarawa United had earlier stunned Heartland FC 2-1 in Owerri to record their first away victory in the 2020/21 NPFL season.

Warri Wolves expressed their desires to grab the maximum points early in the game when Justice Uche Ihuarulam scored for his side inside 23 minutes.

The game, however, changed in the second when the Lafia boys came out smoking with determination to share the spoils.

Their relentless efforts paid in the 65th minute of the match when Silas Nwankwo drew level with a scintillating goal.

Warri Wolves upped their game to take home all the points, but their efforts was not enough until Chinedu Ohanachom netted the backbreaker in the 79th of the keenly contested encounter.

Nasarawa United, in the six games played so far, has recorded four wins and two draws with a total of 16 points to top the log ahead of Rivers United with 15 points which still have a game in hand.

Warri Wolves is rooted in the 15th position of the bottom half of the table with 6 points from six games.

Rivers United will slug it with Kano Pillars at the Sani Abacha Stadium on Wednesday. The match was rescheduled due to Rivers United continental engagement this weekend.