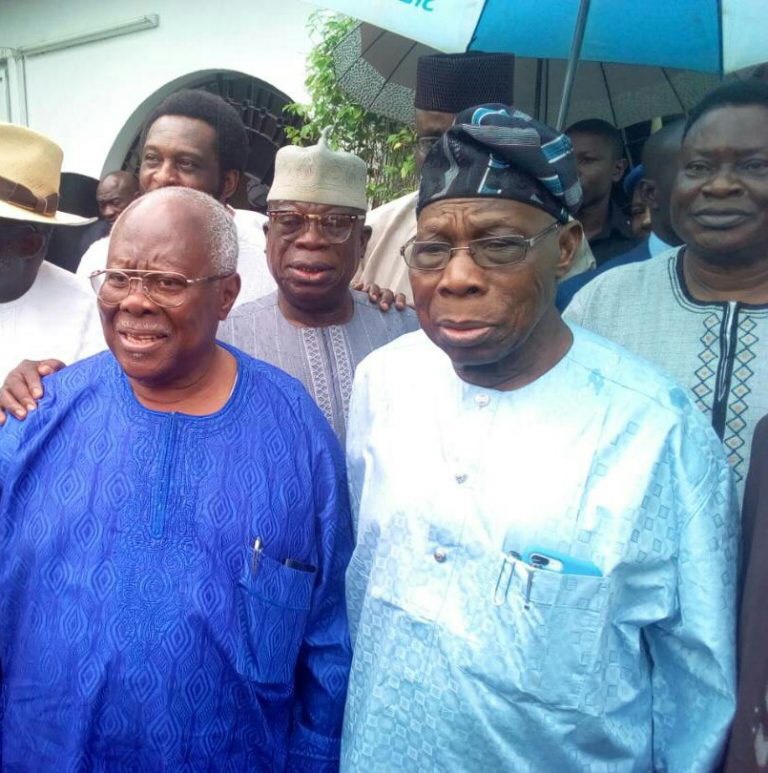 Nigeria’s former President, Olusegun Obasanjo on Saturday met with leaders of the Yoruba socio-cultural group, Afenifere, and other political leaders in the South West on the way forward for Nigeria.

Reports by News Agency of Nigeria (NAN)  stated that the meeting which was held behind closed doors at the Lekki residence of the Afenifere leader, Chief Ayo Adebanjo, lasted for almost two hours.

NAN reports that the meeting was also about sustaining the unity in Nigeria.

Obasanjo, clad in a navy blue Agbada, however declined to speak with newsmen after the meeting.

But the Afenifere leader, Adebanjo told newsmen that the meeting was about strengthening unity in Yoruba land ahead of the 2019 general elections and beyond.

He said that there was the need for elders and leaders in the region to cast their differences aside and stand as one to chart a new course for the country.

“The meeting was nothing more than the fact that Nigeria must move forward.

“There must be unity to destroy mediocrity and dictatorship.

“What is important is that we have our common goal. We are not endorsing candidates yet. We must agree and be united first, and that is what we are trying to achieve.

“If you are not united, you cannot achieve anything. And that primarily was the essence of the meeting,” he said.

Adebanjo said the leaders at the meeting had fruitful discussions on the way forward for the Yorubas and the country, describing the meeting as an achievement.

Also speaking, Pastor Tunde Bakare, the Convener of Save Nigeria Group, said that the meeting was about the way forward for the country at these critical times.

He explained that he and others met on fashioning the way forward for the country.

Bakare said that since it was a closed-door meeting, he would not provide details.

Asked if it was not strange sitting with Obasanjo whom he had always criticised, he said his criticisms of Obasanjo was not borne out of animosity but how to do things right.

He added that his faulting Obasanjo in and out of office did not mean he was his enemy but a call for collective reasoning for the interest of the nation.

“Critique is not the same thing as criticism; it is let us reason together, things are not going the right way,” he said.

On his part, Odumakin said that the meeting was friendly and that there was so much conviviality.

He added that everybody present played active part in the deliberations.

Earlier, Obasanjo had visited a former Deputy National Chairman of the People’s Democratic Party (PDP), Chief Olabode George, to condole with him over the recent death of his son, Dipo.

The former president was accompanied on the visit to George’s Ikoyi residence by some of his aides and loyalists.

Members of George’s family expressed pleasant surprise at Obasanjo’s visit, saying it marks an end to the long-standing rift between him and the PDP chieftain.

Speaking, Obasanjo urged George to take solace in God over the demise of his late son.

“We cannot query God, but to only take solace in what He has done for you.

“If this did not happen, who knows what next would happen.

“I have not been around but it was on my mind to come over and commiserate with you and the family.
“May God grant the deposed eternal rest,” he said.

Reacting in an emotion-laden voice, sister to the deceased’s father, Alhaja Majolagbe George, declared that the rift was over between Obasanjo and her brother.

She said the family was shocked and surprised by the former president’s visit, saying it has ended years of frictions between the two.

“We are shocked when this started. But today, the devil has been put to shame.

“The evil this morning has been condemned outside this house.

“It will never come to these great Nigerians anymore,” she said.