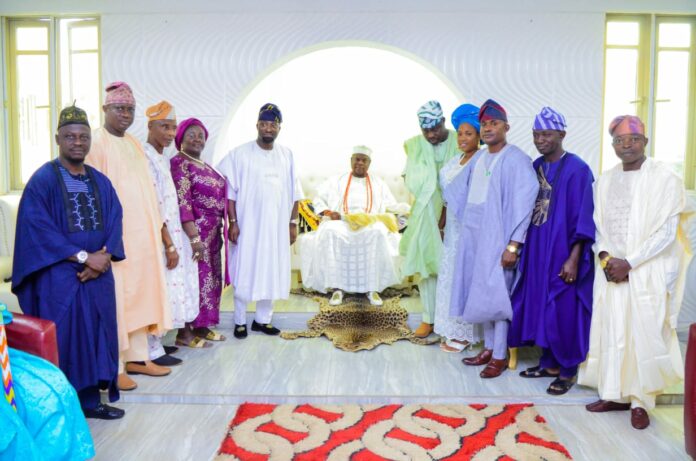 “I am happy to receive you and I have listened to you carefully. However, this is like an ambush because I didn’t know the reason you wanted to meet the Olota-in-Council. If I had known, I would probably have consulted a bit more and have a position on it”. – Olota

OWGA, is a patriotic front and an organisation of concerned Yewa-Awori citizens that have been at the vanguard of pushing for the socioeconomic development and political emancipation of Ogun West Senatorial district.

The group particularly came to seek the Olota-in-Council’s support for the ambition of Barrister Biyi Otegbeye, the gubernatorial candidate of African Democratic Congress (ADC), who is a Yewa-Awori son.

The Convener of the group, Omooba Bolaji Adeniji, who spoke on behalf of the visitors said the time was right for the emergence of an indigene of Ogun West to become Governor.

“Since the creation of Ogun State in1976, no one has been elected as Governor and the time is right now for one of us to be elected. It is not a coincidence that the other two districts that have produced a governor are ahead of us in terms of physical growth and economic development”.

“The bane of our political development, among other things, had always been the multiplicity of Yewa-Awori candidates which has made us to lose in the past. However, without any coercion or asking anyone to step down, providence has this time around, presented only one candidate for us in Ogun West, which is unprecedented”

“We at OWGA have come together from different social and political tendencies to galvanise support for Barrister Biyi Otegbeye who is becoming a unity candidate from Yewa-Awori land. We are here to seek your prayers and support for the success of this agenda”; Adeniji added.

Another member of the group, Chief (Mrs) Adenike Akintade, the Iya Eto of Ilaro said the people of Ogun West deserved to be given the chance to have one of them elected as Governor.

“Why is our own different? We have there Senatorial districts but only Ogun West has been deprived the chance to produce the Governor while the two, East and Central keep rotating the position among themselves. We cannot be treated as second class citizens in this State, therefore we must rally everyone of us to succeed in this 2023 journey”.

Speaking further, “those who are asking us to wait till 2027 are self-seeking and do not want us to develop. There are no guarantees for that period, because the Egbas will come hard for the office by then; so we believe we must not delay till tomorrow what we can achieve today”,

Prince Tosin Adeluyi, another member of the team requested royal blessings for Biyi Otegbeye stating that he is a credible and viable candidate who ranks highest on the gubernatorial field in Ogun State today.

In his response, the Olota said, “I am happy to receive you and I have listened to you carefully. However, this is like an ambush because I didn’t know the reason you wanted to meet the Olota-in-Council. If I had known, I would probably have consulted a bit more and have a position on it”.

“However, I am a part of a whole because a bird cannot fly with one hand, you need to also consult with my brother, the Olu of Ilaro and Paramount Ruler of Yewaland among others? On the matter of Ogun West, I will speak at the appropriate time”.

Continuing, “What you have come for is a noble agenda and should be supported but as monarch, I am not a politician and my role is to bless my children who come to me for support. God is the one that enthrones but it is your duty to put in all efforts needed to make your ambition a reality”,

“I will give you the needed support but heaven helps those who help themselves. You need to work hard and engage those that need to be spoken with so as to achieve your desire”, Obalanlege said.

A member of the Olota council, HRM Oloruba of Oruba, Oba Wadudu Dehinde thereafter poured libations and did traditional prayers for the success of the Ogun West agenda being pushed by OWGA.

Other members of the Olota Council include their Royal Majesties, the Ajana of Ijana, the Oloruba of Oruba, Olukotun of Otun and Olukosi of Osi. Palace Chiefs present at the parley were the Balogun of Ota, Seriki of Ota, Agbaakin of Ota and the Odota of Ota among others.