The Ogun State government has enacted a law that has empowered it to demolish any house providing safe haven to cultists.

The state governor made this known while speaking at the 90th birthday celebration of Alhaji Teslim Dawodu, held on Thursday in Sagamu.

He said his administration would deplore all necessary resources to ensure that all cult-related issues become a thing of the past.

“I have signed a law and that law now empowers me to demolish any house where a cultist is caught.

“Sagamu has had its own peculiar problems and we are on top of it. We are deploring all the resources to ensure that we stay on top of the security situation in Sagamu.

“It is very unfortunate that the capital of Remoland is the place where we begin to have issues with cultists. And you know, traditionally, cultists were usually found in the tertiary institutions, but, these days, you will find out that cultists are now your mechanic, vulcanizer, bricklayer and when you even ask them why they are involved, they don’t even understand,” he said.

Abiodun, however, called on property owners in the state to ensure they have the data of their respective tenants.

“It is very simple, we want our landlords to now do what we call

KYC, which means that you should know your tenants before you give them your house. This is because if we should catch anyone who is involved in cultism and lives in your house, we will demolish such a house,” the governor stated.

Abiodun who urged the people of the state to make use of the remaining days left in the registration exercise for the Permanent Voter’s Card, said that it was imperative for the people to come out in their large numbers to register and ensure that the new voting units are not cancelled as a result of low registration of voters. 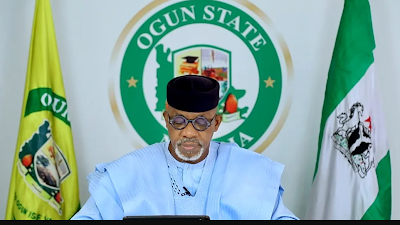 ” I want to urge us to take advantage of the voters registration exercise currently going on, anyone who does not register cannot vote and if you can’t vote, you can’t talk.

“I am pleading with all of us to continue to troop out, we don’t want all the new polling units, about 900 of them to be cancelled.

“Each new polling unit must have a minimum of fifty people who have registered or otherwise, INEC will cancel the unit and we all know that the new polling units are meant to ensure we don’t walk a long distance to vote and we don’t want them to cancel them, let us all go out and register,” he said.

Abiodun, while reiterating that he does not make empty promises, said palliative work has commenced on the Ijoko-Ota road.

The governor who described the celebrant as a principled, consistent and diligent man, added that “he is a man that can only be swayed by merit”.