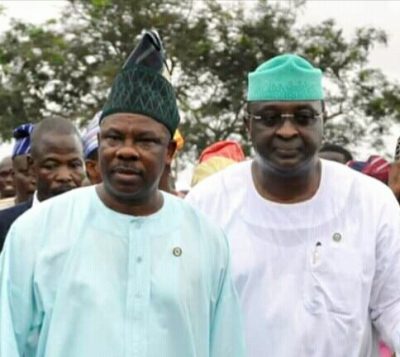 Tolu Odebiyi, a former Chief of Staff in Ogun State is reportedly at war with his ex-boss, Governor Ibikunle Amosun over alleged failed guber ticket promise.

According to a report monitored on societynow.ng, the intense quarrel between the two chieftains of the ruling All Progressives Congress (APC) has consequently increased the numbers of those at odds with Governor Amosun.

Odebiyi has joined the list of those Amosun sees as ‘’enemies’’ in same political party societynow.ng reported.

The Ogun West political figure was one of those touted as a possible successor to Governor Amosun at a point in time.

But the Governor opted to throw weight behind another notable candidate, also from Ogun West, Adekunle Akinlade has preferred successor.

Amosun reportedly compensated Odebiyi by securing the Ogun West APC senatorial ticket for him’’ a source disclosed to societynow.ng.

Things, however, fell apart between Amosun and Odebiyi when the party leadership at the national level rejected Akinlade and gave the gubernatorial ticket of the party in Ogun state to Amosun’s estranged friend, Dapo Abiodun.

Sources disclosed that Amosun ordered Odebiyi to dump the Ogun West APC Senatorial ticket and move into rival Allied People’s Movement (APM) with Akinlade to give the APM to strengthen the power of the new political party.

Multiple sources confirmed Odebiyi refused insisting he remains committed to the ideals of APC as a party and not that of Amosun as a political leader.

Insiders disclosed the refusal greatly infuriated Amosun and he blacklisted Odebiyi and ordered other loyalists to work against his former Chief of Staff’s emergence as Senator representing Ogun West.

It was gathered that the situation between the Governor and his former Chief of Staff is such that ‘’they now intensely oppose one another at every turn’’.

Interestingly Amosun retains status as a Senatorial candidate of the APC in Ogun state while ordering Odebiyi to drop own ticket.