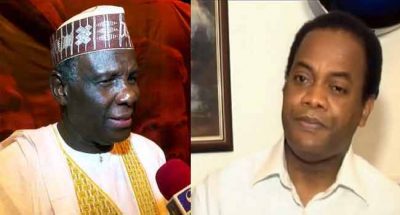 The Independent National Electoral Commission (INEC) on Friday explained why it removed the name of a former governor of Cross River State, Donald Duke, from the final list of presidential candidates published on Thursday.

The national commissioner said the electoral umpire took the decision in line with a court judgement which ordered it not to recognise Mr Duke as the presidential candidate of the Social Democratic Party (SPD) in the general elections.

“The name of Donald Duke was forwarded to the Independent National Electoral Commission as the candidate of the SDP for the presidential election,” Mr Okoye said.

“Thereafter, the Independent National Electoral Commission received a court order to the effect that all the votes that were scored by Donald Duke during the SDP primaries were wasted votes, and that the candidate of the SDP in the presidential election should be Professor Jerry Gana.”

Mr Okoye stressed further that it was the action of the SDP that led to the exclusion of the name of Professor Gana – a former minister – from the list.

He said INEC expected the party to forward Gana’s name as its presidential candidate and not the responsibility of the commission to do so.

“The court went further to direct that it is the political party itself, the SDP, that should submit the name of Jerry Gana to the Independent National Electoral Commission,” Okoye stated.

He added, “As at the time we published the list yesterday, the SDP has not forwarded the name of Jerry Gana as the presidential candidate of the party.

“So, we are waiting for the party to submit the name of Jerry Gana … that is why we removed the name of Donald Duke from the list that has been published.”

The INEC official said they are ready to include Professor Gana’s name on the ballot as the SDP candidate as soon as his party obeys the court order.

He insisted that the court never instructed the commission to include the name of the former minister, stressing that the onus lies on his party.

Justice Hussein Baba-Yusuf had nullified the candidacy of Mr Duke as the flagbearer of the SDP in a ruling in December 2018.

He had consequently declared Professor Gana as the winner of the presidential primary conducted by the party.