In efforts to win the Ogun state governorship election, Governor Ibikunle Amosun’s candidate of the Allied Peoples Movement (APM), Adekunle Akinlade and Ladi Adebutu, who lost the governorship ticket of the Peoples Democratic Party (PDP) in Ogun have agreed on how to share power and split contracts in case the APM candidate wins.

Documents made available to newsheadline247 showed how Adekunle Akinlade, governorship candidate of the Allied Peoples Movement (APM), and Ladi Adebutu, who lost the governorship ticket of the Peoples Democratic Party (PDP) in Ogun, agreed on who will get what in the yet to be formed government.

The two politicians are serving members of the house of representatives.

Akinlade, the preferred candidate of the outgoing governor Amosun defected from the ruling All Progressives Congress (APC) to the APM after losing the party’s ticket to Prince Dapo Abiodun.

With the alliance between the duo, Adebutu is expected to mobilise members of his faction of the PDP to support Akinlade’s victory.

The agreement is to be valid for a period of three years from the March 7 date when it was signed.

“The parties hereby agree to work together and support to ensure the victory of Hon. Akinlade at the March 09, 2019 Governorship election in Ogun State,” the document read.

“That Senator Amosun and Hon. Akinlade hereby agree and Ladi Adebutu concur to the following allocation of positions in Government and immediate attention to the infrastructure projects as listed herewith:

“The understanding is made with a copious note that Sen Ibikunle Amosun and Hon Akinlade, have respectfully agreed to implement all the above stated clauses with each assuming shared responsibilities on those projects in Ogun Central and West Districts respectfully,” the document read. 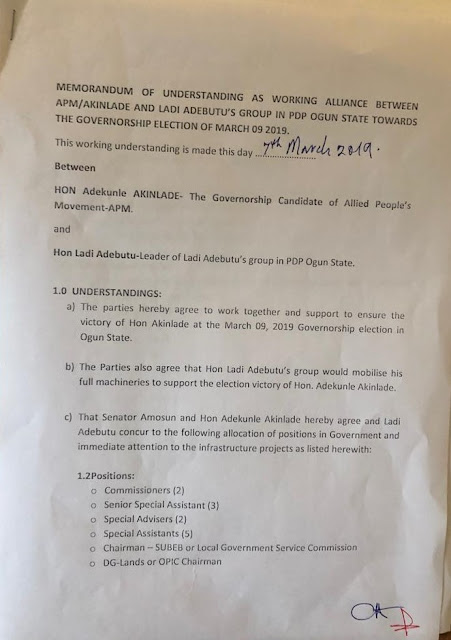 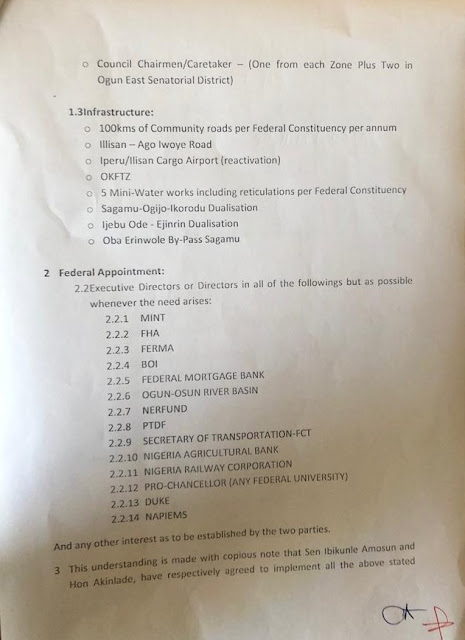 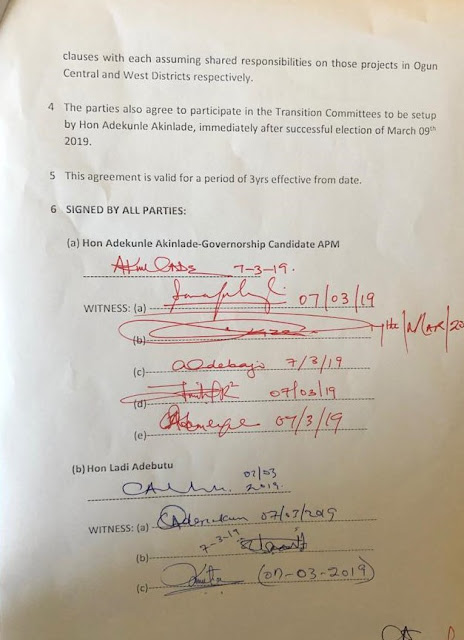