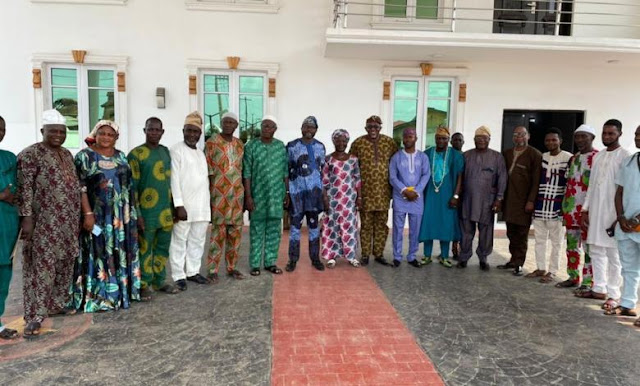 Bankole stated this when he met with social clubs, NGOs and cultural clubs groups in Ado-Odo/Ota Area of Ogun State and sought their support towards hosting a successful celebration, a December to Remember.

Bankole revealed that the ministry has promised to set all the necessary machinery in motion to ensure that the event is given all the attention it deserves and makes it memorable as a means of promoting the rich heritage and culture of the people of the Ota-Awori Kingdom.

While seeking the support of the clubs and societies, at the palace of the Olota of Ota at a meeting held on Friday, 11th November 2021, Aare Bankole said that the clubs were all expected to donate into the central purse, adding that they were not expected to pay for canopy or chairs during the events, a new arrangement, which he said was introduced by his committee.

In his remarks at the meeting, Aare Dele Bankole explained the potentials of the event, which he said would be deployed to showcase the cultural heritage of the Ota-Awori Kingdom, her foods, her dances, cultural practices and other socio-cultural attitudes.

It was expected that by the conclusion of the festival celebrations on December 18, Odun Omo Iganmode would have become a major tourist attraction in Ogun State and the entire Yoruba nationality.

He also spoke about the efforts made so far in relation to the contributions and the various commitments of the sons and daughters of Ota Awori home and abroad.

“We must form a formidable partnership with the state government and project our culture and customs to the whole world. All donations made are being publicly announced and the same will be published in the official publication of the festival and on our official websites. I’m sure no club or society would want to be left out,” he said.

Hon. Nurudeen Aina Akinpe;, a former member of the Ogun State House of Assembly also corroborated what the chairman said, while Chief A. Omoroga advised more efforts should be put on publicity and getting across to families, Olori Igas, Baales and other critical stakeholders to make the event a truly communal event.

Chief Omoroga suggested that youths should be given recognition during the celebration, and implored members to inform more successful sons and daughters of the Ota-Awori Kingdom from all over the world and about the programme.

On his part, Alhaji Dagbure charged the groups to be more committed to the celebration and to the development of Ota community.

He commended the committee for the good job being done to announce every donation being committed by the citizenry.

It was suggested that more clubs and societies as well companies should be contacted to be part of the events.

However, the President of the Ota Gravity Foundation, Mr Semiu Abiodun Adeniran announced a donation of N300,000 in support of Odun Omo Iganmode.

In his words, “As a foundation, our support for any programme that will promote socio-cultural and development oof Ota is unflinching.”

He encouraged other social and cultural groups to follow this initiative and make Odun Omo Iganmode a truly tourist identity for Ogun State.

Importantly, all social clubs and groupings agreed that registration for this year’s event should be done on donation for registration basis.

The breakdown of proposed programmes for the week was given as Monday, December 13, Osugbo Prayer at the Palace, Medical Outreach and visit to Charity Homes.

On Tuesday, December 14, there would be Youth Summit, while Wednesday, 15 December is Cultural Day.

Thursday, December 16 is for
Installation of Chiefs, while December 17 is for Jumat Service.

Saturday, December 18 is the Grand Finale and on Sunday, December 19, there would be Thanksgiving Service at Living Faith Tabernacle aka Winners’ Chapel.