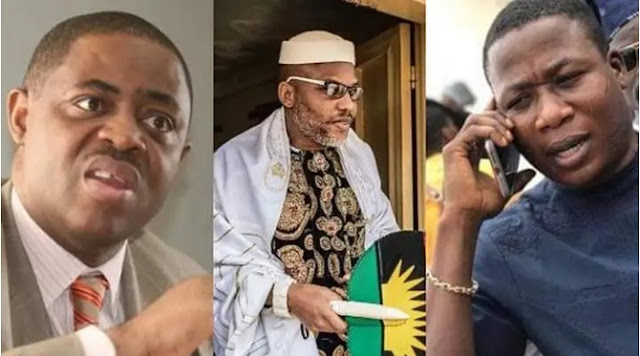 “How can these two people who were close to you and who confided in you, end up in Buhari’s trap and then you join his party?

The ex-aide to President Goodluck Jonathan, in a comment, claimed that Fani-Kayode sold Kanu and Igbo for ’30 pieces of silver’.

He wondered why Fani-Kayode joined the APC following the prosecution of Kanu and Igboho by the President Muhammadu Buhari-led Federal Government.

In a series of tweets, Omokri likened Fani-Kayode to the biblical ‘Judas Iscariot’.

He wrote: “The PDP lost FFK and gained @ShehuSani. I would say that is like Manchester United losing Sergio Romero and gaining Cristiano Ronaldo. That is a net gain. A net gain indeed! Congratulations PDP! Congratulations Shehu Sani!

“You say you are a friend of Sunday Igboho. You called him your brother. You called Nnamdi Kanu your “friend and brother” and one of the most courageous persons you know.

“You see what this demon in human flesh is doing to these freedom fighters, yet you do this? It makes me suspicious.

“How can these two people who were close to you and who confided in you, end up in Buhari’s trap and then you join his party? This looks like 30 pieces of silver! At this point, I would very much hate to be your friend and brother.”

NEWS: EFCC Chairman, Abdulrasheed Bawa, opens up on why he collapsed