Ondo 2020: Akeredolu settles rift with Tinubu, holds peace meeting with him in Abuja 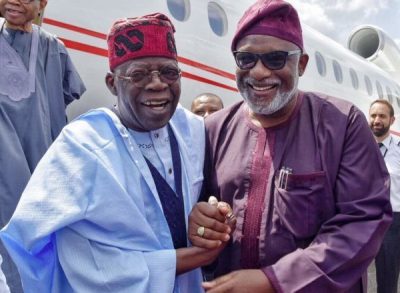 The political rifts between former Lagos Governor, Bola Tinubu, and the governor Rotimi Akredolu of Ondo, appears to be coming to an end following a reported peace meeting between the duo in Abuja on Sunday.

The two political heavyweights threaded on parallel paths after the 2012 governorship election in the state when Akeredolu was the candidate of the Action Congress of Nigeria (ACN). He lost the election to the Labour Party’s Olusegun Mimiko.

The bitterness became pronounced during the struggle for the APC ticket for the 2016 governorship election. Tinubu, a national leader of the party, backed Segun Abraham against the interest of Akeredolu.

When Mr Akeredolu eventually defeated Mr Abraham and Olusola Oke to become the APC flagbearer, Mr Tinubu reportedly sponsored Mr Oke on the platform of the Alliance for Democracy for the election proper.

Mr Akeredolu, a Senior Advocate of Nigeria, still triumphed at the polls to the irritation of Mr Tinubu and his associates in Ondo State.

Mr Tinubu however, had his pound of flesh in the build up to the 2019 general elections, when he ensured, with the backing of the APC NWC that Mr Akeredolu was denied the privilege of having his men fielded for the National Assembly and state Houses of Assembly elections.

The development resulted in what is now tagged “anti party activities,” where the governor tacitly supported some of his favorites to contest the elections on the platform of the Action Alliance, (AA).

The said peace meeting between Messrs Akeredolu and Tinubu is coming a week after the rumoured suspension of the governor by the NWC for his role in the last general election which allegedly cost the APC the presidential election in the state.