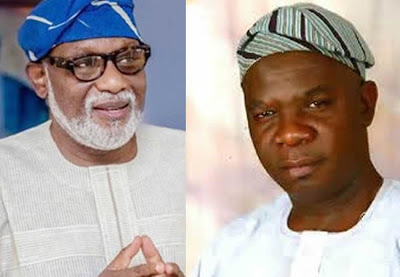 Deputy Governor Ajayi Agboola of Ondo State may resign this week following flowing reports of his intention to defect from the ruling All Progressives Congress (APC) to the opposition, the Peoples Democratic Party (PDP) where he is expected to vie for the seat of the governor.

Newsheadline247 understands the relationship between Agboola and Governor Oluwarotimi Akeredolu has since collapsed over unresolved issues of trust and betrayal.

Information gathered also indicate that some APC lawmakers in the Ondo State House of Assembly would also resign their membership of the ruling party to enable them join the PDP.

Candidate of the PDP in the 2016 governorship election, Eyitayo Jegede, hinted on the defection of Agboola last week when he picked his nomination form.

In his reaction to the much-anticipated defection, Jegede stated that the coming of Agboola to the PDP “demonstrated that the APC has collapsed and Agboola needs to look for a good house.”

According to Jegede, “If APC was and is good, Agboola Ajayi would not leave APC. If PDP is bad, he would not say he is coming to PDP.

But the spokesman for Agboola, Babatope Okeowo, refuted reports claiming his boss was planning to resign his post as the deputy governor of the state.

He said Hon Agboola does not need to resign as Deputy to contest the governorship election.

Okeowo said it was not true that his boss would resign this week. He said his boss could contest whether in the PDP or the APC without resigning from office.

However, the Ondo State Commissioner for Information and Orientation, Donald Ojogo, in an interview last week said Governor Akeredolu was not interested in impeaching or removing the Deputy Governor Agboola.

He said, “Mr. Governor believes that whoever wants to leave his government can leave at any time. He will not raise a finger to push anybody out.

“If the governor is having enough majority, a comfortable majority that is more than two-third in the House of Assembly and he has no problem dealing with them, then why must he go-ahead that they must impeach someone?

“Since Akeredolu came on board, the office of the Deputy Governor became more powerful than it was.

“And if actually, they have parted ways, it will be an unfortunate and only betrayal of trust and confidence could have been the reason.”