Only a president from Igbo extraction can fix Nigeria – Ezeife 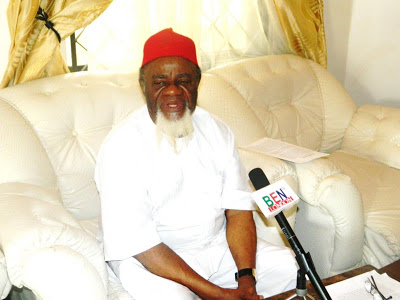 A former governor of Anambra State, Chukwuemeka Ezeife, has said only a president from the Igbo origin in the South-East Region of Nigeria can fix the multiple problems facing the country.

The elder statesman, in an interview with Sun, identified the country’s challenges as almajiri system, diversification of the economy, among others.

In his reaction to the influx of youth from the northern region into the southern region of Nigeria, Ezeife pointed out that the almajiri system in the north failed as a result of poor training and education of youth in the region.

He added that a president of Igbo origin would invest in training the youth and put them into economic use.

“Talakawas and Almajarai, I think what they should pray for is Nigeria’s president of south-east origin. A president of Igbo origin will end Almajarai by effective training of the Almajarai for economic use,” he said.

“Therefore, if a president of Igbo origin is in place, this Almajiri business will disappear after a number of years. It is not months because it takes a long time to train somebody to be useful.

“I am sure every Nigerian knows that a Nigerian president of Igbo origin will fix Nigeria; make it grow and raise the dignity and respect of black people on earth because if you look at it, it is nothing to prove to any Nigerian. The person has to just go and look at Igbo people in his area and see whether they are making progress or retrogressing.

“We train people. And in this case, when you are the president of a whole country, you can’t allow some people to be poor and some people rich.”

Ezeife, however, urged the federal government to diversify the economy and reduce the country’s dependence on crude oil.

He further called for more inclusion of the southeast states in the plans of the federal government including the distribution of palliatives.