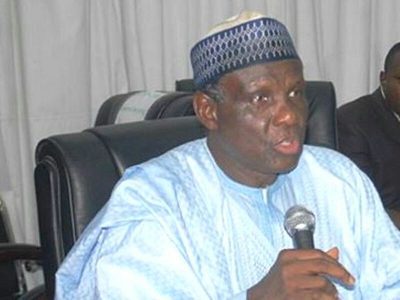 The campaign team of Prof. Jerry Gana, a former information minister and the presidential candidate of the Social Democratic Party (SDP) has rejected the of President Muhammadu Buhari

Ike Neliaku, the director-general of Gana’s campaign, while speaking with journalists said those who endorsed Buhari in the party are hirelings.

The national spokesman of the SDP, Yinka Oyebode had announced that the national executive council (NEC) of the party, took the decision to endorse Buhari’s reelection bid after a meeting.

The campaign DG said “principled” members of NEC were not invited for the meeting were it was agreed that Buhari should be endorsed.

“We wish to categorically condemn and dissociate ourselves from this unfortunate, retrogressive, outrageous, unjust, mercantilist, disgraceful betrayal of trust and anti-party activity led by a small faction loyal to the running mate to Donald Duke, Alhaji Shehu Gabam,” he said.

“Their pronouncement puts the party in a political mudslide that not only put the party in bad light but is injurious to all other SDP candidates standing election on the platform of the party.

“This repulsive duplicity is unacceptable to our Campaign Team, our supporters and millions of esteemed SDP members whose voices we represent and on whose mandate this statement is issued.

“We note that majority of authentic and principled NEC members were not invited to the said meeting; while some that were invited boycotted the meeting.

“Likewise, hirelings were recruited to bear the identities of genuine NEC members, who, though were invited but chose not to be a part of their envisaged insidious plot packaged in a desperate bid to create a perception of acceptability so as to enhance the value of their merchandise and ultimately increase the revenue of their transaction.”

He said a stakeholders conference had been scheduled for Monday in a bid to “encourage” Gana.