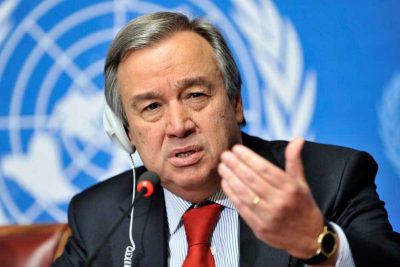 Ahead of upcoming elections, the UN has advised Nigerian politicians to avoid messages of hate, politics of acrimony, bitterness and rancour to avoid undermining the peace and stability of Nigeria.

The special representative of the UN Secretary-General and Head of the United Nations Office for West Africa and the Sahel (UNOWAS), Mohamed Ibn Chambas, gave the advice in Abuja on Saturday.

The workshop was organised by the National Broadcasting Commission (NBC) with the theme: “Fake News, Hate Speech, Vote and PVC Buying”.

Mr Ibn Chambas, represented by Zebulon Takwa, Peace and Development Advisor, Resident Coordinator’s Office, emphasised the need for all Nigerian stakeholders to eschew any form of discourse that could ignite tension and violence.

The envoy also urged the stakeholders to double their efforts in ensuring issue-based elections that would make Nigeria to succeed.

He expressed the hope that the country would overcome its challenges.

“I hope that Nigeria continues to set the pace in establishing the positive tradition that, as leaders, access to power or quest to retain or consolidate it, must never be stained with blood of any Nigerian.

“It is, therefore, crucial that Nigeria delivers credible, peaceful and fair elections in 2019, in a manner that improves upon the performance of 2015 elections.

“Nigeria, as the `big brother`, has played a critical role in stabilising many parts of Africa and consolidating their democracy; therefore, Africa is looking up to you for leadership,” Mr Ibn Chambas said.

He urged that all candidates and political parties be given a level playing field and treated with respect and fairness, saying that UN was looking forward to Nigeria’s 2019 elections with realistic optimism.

“I have equally expressed my concern that fewer women and youth candidates have been fielded by political parties than expected of Nigeria with a large number of women voters and enthusiastic youths, who are eager to take part in nation-building as responsible leaders,” he said.

Mr Ibn Chambas assured Nigeria of the commitment of UN to contributing toward violence-free and hitch-free elections that would symbolise global best practices.

“The United Nations is committed to assisting with any measure that will enhance popular confidence in the electoral process,” he said.

The Director-General of NBC, Is’haq Kawu, advised broadcasters to assist in deepening the democratic culture by refusing to air narratives dangerous to the peace of the country.

Mr Kawu said that over the past three years, NBC had been sensitising its licencees on the dangers associated with hate and dangerous speech.

“In 2016, we commissioned a team of Nigerian researchers to do an in-depth study of the place of hate and dangerous speech in the 2015 General Elections as well as the manner that the broadcast media became suborned into the controversial political circumstances of the last elections.

“We had used the reports in gathering of broadcasters in Kaduna and Kano; just this week, we were in Lagos.

“Today’s gathering in Abuja is the final one, timed to bring critical stakeholders together on the eve of the 2019 General Elections,” Mr Kawu said.