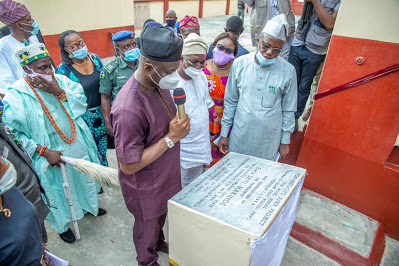 Ipapo, one of the most prominent towns in Itesiwaju Local Government, got the attention of the state government in terms of infrastructural development for the first time in as many years.

The commissioning of the school project was held on May 27, 2020 right in the school premises along Owode road in the ancient town.

Governor Makinde on his Facebook post said the Ipapo Anwar-Ul-Islam Basic School was one of the twenty-two model schools completed by this administration in the past one year.

“Today, we commissioned a model school, Anwar-Ul-Islam Basic School, Ipapo in Itesiwaju Local Government Area. This is one of twenty-two model schools completed by this administration in the past one year,” Makinde stated.

He added, “Since we assumed office about a year ago, our administration has made it a priority to complete all outstanding projects. For this reason, we paid UBEC counterpart funding for 2018 and 2019, and this enabled us to access matching grants to complete these infrastructural projects in the basic education sector.”

The Eleyinpo of Ipapo, Oba Yekini Ademola, Abioye II was among the notable personalities present at the commissioning.

The revered royal father hailed the governor on his commitment to education development and as well as other basic sectors in the state including health, agriculture, rural development among others.

Share
Facebook
Twitter
Pinterest
WhatsApp
Linkedin
Tumblr
Telegram
Previous articleAnthony Joshua: ‘I don’t have a girlfriend and I haven’t had one for a while’
Next articleZamfara free of COVID-19 cases after discharging all patients