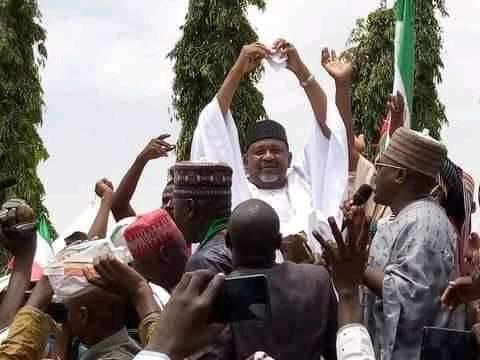 “I was in the APC and I have seen everything that is happening, nothing encouraging. PDP is the best place to be.”

A former deputy governor of Gombe State, John Yoriyo, has reportedly led an unconfirmed number of card-carrying members of the All Progressives Congress (APC) in the state to join the opposition – the Peoples Democratic Party (PDP).

Other top politicians that also dumped the ruling party include Abdulkadir Hamma Saleh, a former governorship candidate; party executives at various wards, and Abubakar Abubakar, a former member of the Federal House of Representatives.

Gombe State PDP chairman, M. A Kwaskebe, received the defectors on Saturday at the party secretariat on behalf of Ibrahim Dankwambo, party leader and former governor of the northeast state.

Kwaskebe said the defection happened at the “right time,” adding that the APC will no longer occupy the seat of power in 2023.

He added that the defectors will enjoy equal rights and privileges as other members of the party.

“We are glad to receive those that left the party, thinking that the PDP had collapsed. They are now coming back home,” he said.

In his remarks, Yoriyo described the PDP as the “best political party” in the country in terms of governance.

“It is obvious that the APC has failed in Nigeria, especially in the area of security,” he said.

“I was in the APC and I have seen everything that is happening, nothing encouraging. PDP is the best place to be.

“There was nothing like democracy under APC in Gombe State. Nobody knows what is happening; we were ignorant; we are just being ruled.”