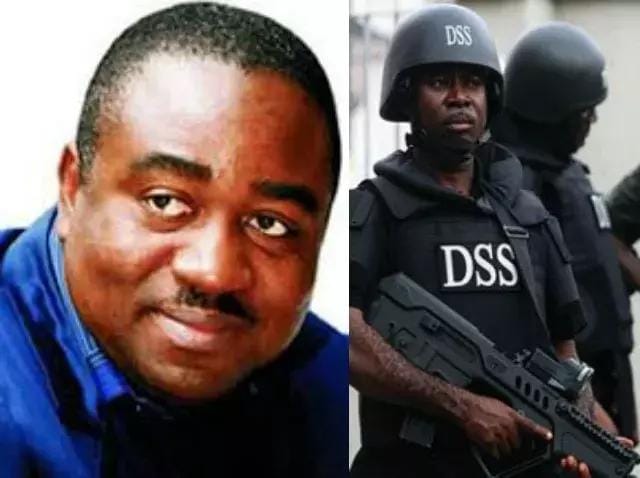 The Peoples Democratic Party (PDP) has condemned the detention of former Governor of Benue State, Gabriel Suswam, by the State Security Service (SSS).

The SSS had on Sunday arrested Mr Suswam over security issues in Benue State.

His arrest followed a petition by Governor Samuel Ortom, alleging he was planning to make the state ungovernable, Channels Television reported.

Reacting through a statement, the main opposition party alleged the arrest was to put Mr. Suswam out of circulation so that he will not take part in mega-meetings of the party planned for North-central states.

The party claimed Mr. Suswam was being kept incommunicado, without access to his lawyers, while the Federal Government was not forthcoming on the reasons behind the detention.

“Having failed in their corruption smear campaign against the PDP and many notable Nigerians, the APC and the Presidency cabal have now devised a devious machination to rope in, frame up, implicate and ultimately incarcerate marked opposition leaders and other dissenting voices over fabricated security charges,” PDP stated.

“Part of this design, as already exposed by the Special Adviser to President Buhari, Mr. Femi Adesina, on Arise TV, is to link such opposition leaders and dissenting voices with the widespread killings in various parts of the country.”

The party said the federal government had forgotten President Muhammadu Buhari earlier blamed the attacks on invaders from Late Muammar Gaddafi’s Libya, while the Director-General of SSS blamed herdsmen from neighbouring countries.

It said there were fears that other opposition leaders and dissenting voices have been placed under watch and will be dragged in and framed up on security charges, so as to keep them out of circulation ahead of the elections.

“Nigerians are already aware of the alarm raised by former President Olusegun Obasanjo of alleged plots by the Buhari administration to frame, arrest and detain him indefinitely on trumped up charges, ostensibly following his criticisms and open rejection of the administration for its failures and manifest misrule.”

It said the world is also aware of the numerous alleged plots by the APC and its Federal Government to frame up and humiliate Senate President Bukola Saraki, Deputy Senate President, Ike Ekweremmadu, Dino Melaye and Shehu Sani, as well as Rivers State Governor, Nyesom Wike and his Ekiti state counterpart, Ayo Fayose.

PDP added there were concerns about the safety of former Chief of Army Staff and former defence minister, Theophilus Danjuma, following the fear expressed by Rivers State Governor Nyesom Wike that Mr Danjuma’s life might be in danger after his comments in March on possible complicity of the State in the killings in Taraba State.