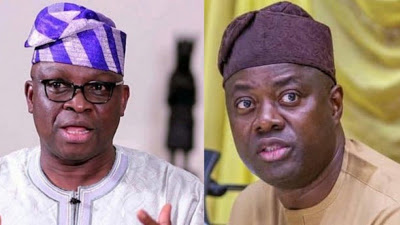 Olujimi, who insisted that Makinde is the party’s leader in the South-West geo-political zone, urged the governor to discountenance moves against him, but continue with his quest “to reposition, galvanise and salvage the party from the brinks of collapse”.

Fayose, on Wednesday, had warned Governor Makinde not to meddle into political affairs in Ekiti State and other South-West states.

Olujimi, speaking in Ado Ekiti at a meeting of her faction of the PDP, described Fayose, including his collaborators as ‘political jobbers’ and asked Makinde to ignore their threats.

She said, “Makinde is the symbol of the party in the South-West. So, anything that must come from the zone must come through him. Fayose and his conspirators’ visit to Uche Secondus was nothing but a recreational. I can take anybody to the National Secretariat of the party and we take pictures.

“ We stand by Makinde because nobody can rubbish him and wish him away. This is the best time South-West Zone needs the governor most when ‘hijackers’ are trying to undermine the party’s structure through egregious conspiracy.”