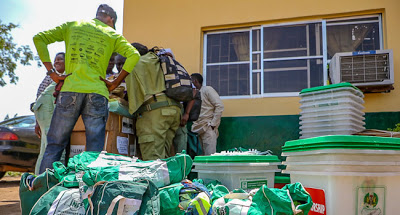 The senators, led by the Minority Leader of the Senate, Enyinnaya Abaribe, announced the rejection at a news conference in Abuja.

INEC had declared the candidates of the All Progressives Congress (APC), David Lyon and Yahaya Bello, winners of the gubernatorial elections in Bayelsa and Kogi States.

“We want to call the attention of Nigerians. We are very disturbed by the elections that were held last weekend in Bayelsa and Kogi,” the lawmakers said.

“We totally reject the pronouncements after the elections by INEC and we are worried about the trend of what happened during the election.

“We know that the results that were announced were not a true reflection of what happened in the field.

“We are much more concerned about the fact that it seems that all the gains made by the PDP in all the period of democracy starting in 1999 seem to have been eroded from the elections starting in Osun, Edo and culminating into last weekend.

“We are further pained by the fact that the PDP woman leader, Salome Abuh, after declaration of result, hoodlums still chased her to her house and burnt her to dead in the clear view of security agents.”

The caucus called on President Muhammadu Buhari to direct the Inspector-General of Police and other security agencies to immediately fish out the killers of Mrs Abuh.

“We hear that the police are launching an investigation but this is something we don’t want to be put under the carpet because it involves life,” Mr Abaribe said.

Meanwhile, the spokesman of the Senate, Godiya Akwashiki, in his reaction to the outcome of the Bayelsa and Kogi gubernatorial elections said: “I don’t think it will be right for the Senate to say anything about the election.”

“Nigeria is not a lawless country and we must obey it. The Electoral Act has spelt out everything that there should be primaries between aspirants in political parties so a candidate will emerge.

“After the primaries, INEC will set aside a day for general election. Based on the Electoral Act, the elections have come and gone. If anyone has any grievances, they know what to do,” he said.