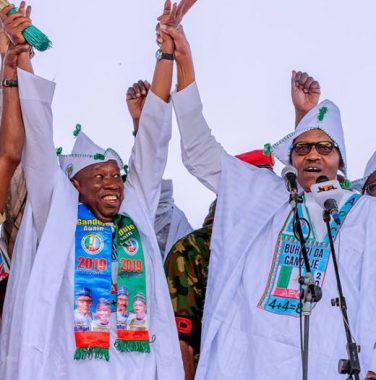 The Peoples Democratic Party (PDP) has berated Buhari and the All Progressives Congress (APC) over the presence of two governors from the neigbouring Republic of Niger at the APC Kano presidential rally.

Governors Issa Moussa and  Zakiri Umar of Zinder and Maradi States respectively, both from the Republic of Niger, were on Thursday in Kano to rally support for President Muhammadu Buhari’s re-election. 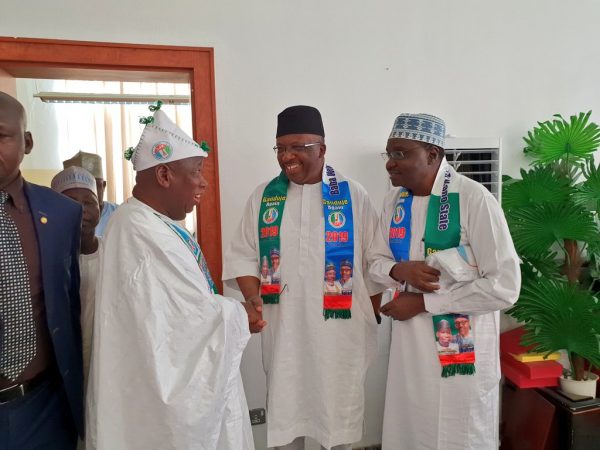 Salihu Yakasai, media aide to Kano State Governor, Umar Ganduje, said this on his Twitter handle beneath a photo of the governors and Ganduje.

Yakasai said, “H.E @GovUmarGanduje with his deputy H.E Dr Nasiru Gawuna, his former Dep H.E Prof Hafiz Abubakar, Minister of Interior Abdurrahman Dambazau and that of Water Resources, Suleiman Kazaure, Governors of Zinder and Maradi from the Niger Republic, & others getting ready to receive @MBuhari #PMBinKano.”

Yakasai added that the two Nigerien governors were in Kano to rally support for the President Buhari’s re-election.

PDP had, however, accused Buhari of mortgaging the future of Nigeria.

The opposition party alleged that the move made by Buhari and his party, the APC, indicates the president and the ruling party would also import voters from neighbouring countries for the February 16 Presidential election.

The National Chairman of the PDP, Prince Uche Secondus, speaking to reporters, called the attention of the international community to the alleged plan by the ruling party.

Elections, he said, were internal affairs of Nigerians, wondering why the two foreign governors would be in Kano to welcome the President to his own country.

He said the presence of the two foreign governors had also vindicated the PDP’s claim that President Buhari and his party had been importing foreigners to attend the APC rallies.

Secondus said, “We have been saying it that the President does not consider the interest of Nigerians first in any of his actions. The President of Nigeria has sold the country to those who he loves more than the people who own the nation.

“The present of the two foreign governors is significant in many ways. One, it shows that the President and the APC, like we said, have been importing foreign leaders to the country to attend their rallies.

“We have been saying this and I’m happy Nigerians now that God has exposed them. Their evil plot has come to the open.

“You know that even in almost all the states where the President and his party have become unpopular, they keep on boasting that they will win with a landslide victory. One of the ways they planned to get the votes is the illegal importation of foreign voters, who are also underage.

“We want to call the attention of Nigerians to this assault on our sovereignty. We want the foreign and developed democracies to take note of this action and hold the President responsible if there is crisis before, during and after the elections.

“It is sad that the minister in charge of internal security of the nation was present. We know that they are planning negative things ahead of the elections. We just want to warn them not to plunge the country into crisis.”

Secondus added that the President had also demonstrated why his government had been treating the killer herdsmen with kid gloves.

But the President, Nigeria Voters Assembly, Mashood Erubami, said, “There is nothing unusual about the presence of the two governors with  President Buhari. It could be coincidental but having to do with the joint efforts between them and the Kano State Government to confront the scourge of insurgency in Nigeria.

“The two governors are not registered voters in Nigeria and there is no possibility that they will mobilise their citizens across the borders without PVC to come and vote in Nigeria. It is unfortunate that opposition politicians always turn red to blue and would want gullible Nigerians to accept their agenda for the truth.

“I will advise those suspecting to be extra-vigilant during the elections. Also voters  must be vigilant too in their different voting centres to ensure that those who did not register in their vicinity are exposed and are not allowed to vote.”

He also noted that under the Nigerian laws, an accused person remained innocent until proved guilty by the courts.