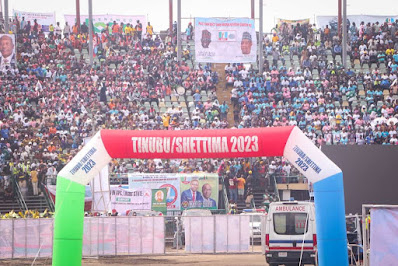 The All Progressives Congress (APC), on Saturday, held a mega rally in Lagos for its presidential candidate, Bola Tinubu.

The rally, which was held at the Teslim Balogun Stadium, had in attendance thousands of supporters of the party and governors elected on the platform of APC.

The stadium was filled to the brim as thousands of APC/Tinubu supporters thronged the venue where the carnival-like rally was held amid tight security.