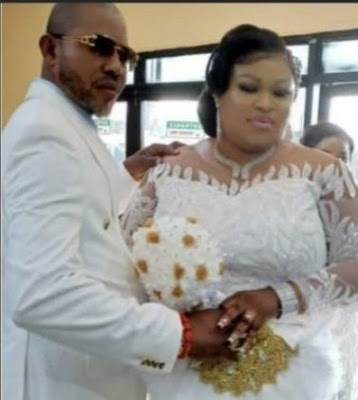 Afro Juju maestro, Sir Shina Peters was said to have entertained guests at the wedding which was held in the city of Lagos, while Nollywood star, Aina Gold was the compère.

Her new husband is identified as Aremu Abiola, according to reports.

Information made available revealed that Silifat who was Oko Oloyun’s “only wife” and mother of his six children; five boys and one girl, remarried barely two years after his controversial assassination, according to Firstweekly Magazine.

It was, however, gathered that the family of Oko Oloyun, including the children, are bitter over the decision of Silifat to settle down with another man so soon.

Investigations revealed that family members described Silifat as “insensitive and wicked,” adding that she has not done much to unravel the circumstances surrounding the death of her husband.

This reportedly caused the children to stay away from the wedding ceremony.

“The parents of Oko Oloyun are complaining of neglect, while she lives in affluence and even opened an ultra-modern hotel in Ekiti State recently.

“They are complaining that Silifat abandoned them as she took over the family business without thinking of how the extended family of the late herbal medicine practitioner would survive.

“Her latest wedding introduction and the traditional wedding was at Oko Oloyun’s House and they (the new couple) even drove to and back from the ceremony on Wednesday and Thursday in one of the exotic cars of her late husband, this was a surprise to many members of the family and even their friends,” said a source.

Recall that Fatai Yusuf (Oko Oloyun), was killed in January 2020.

Yusuf was killed around 4:30 pm on the road while travelling to Iseyin, Oyo State.

He was reportedly attacked at Igboora.

He also got involved in some money ventures, promising high returns, as high as 10 per cent to people investing in distributors of his products.

Reports also had it then that N35 Million was found in the bank account of the alleged jobless husband of one Abbey, a lady said to be next in command to Oko Oloyun, to the surprise of law enforcement agents.

There was an allegation that it was the document in the woman’s office that got burnt hours before Oko Oloyun was assassinated.

Sources revealed that the late Oko Oloyun had ordered investigations into some alleged fraudulent activities in his office before the fire incident and his assassination.

What surprised many people was that the two unfortunate incidents happened in quick succession, thus leading to suspicions that the incidents were the results of the investigations he ordered into the massive fraud in the company.

Abbey, we were told got into the company as an ordinary site worker, but Oko Oloyun converted her role to an office job.

The woman and other suspects were later detained at Iyaganku Police Station, Ibadan, Oyo State.

She was working at the head office in Lagos and in charge of the distribution of the Oko Oloyun range of herbal products.

It was also heavily rumoured then that a particular staff of the company was pregnant for him at the time he was killed.

The demand of the family members of the late Oko Oloyun and members of the public was that the police should investigate Abbey and her husband and do everything within their means to ensure that the late herbal medicine practitioner did not die in vain.

However, no one has been charged in court in connection with Oko Oloyun’s murder.