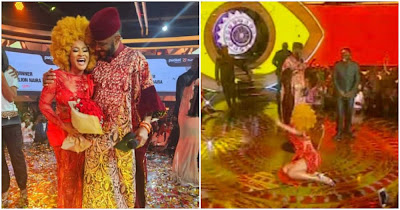 Phyna, one of the finalists of the Big Brother housemate, has won the season 7 edition of the popular TV show.

The top two finalists from the 10 weeks show were Phyna and Byran.

In his last address to the final two contestants, Biggie said, “the world now awaits you. You may now leave the Big Brother house.”

Phyna, who won the show, will be walking home with a N100m grand prize— a cash prize of N50m and N50m worth of prizes from the sponsors.

In addition, 30 fans of the show won N1m each in the ‘Fave Lock-In’ promo exclusive to DStv and GOtv customers.

Earlier, four housemates were evicted from the final six contestants.

The evicted housemates include Daniella, Chichi, Adekunle, and Bella were evicted from the reality TV show on Sunday, the final day of the competition.