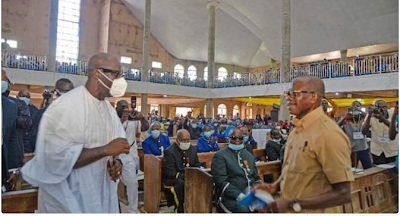 “Once the governor speaks, the matter ends,” says Oshiomhole

Edo State Governor Godwin Obaseki met with Adams Oshiomhole, the former chairman of the All Progressives Congress (APC), at an event in the state on Saturday.

Governor Obaseki and Oshiomhole, his predecessor, parted ways ahead of the 2020 governorship election in the state over party candidacy.

Their differences ahead of the election subsequently led to the defection of Governor Obaseki from the APC to the opposition party, the Peoples Democratic Party (PDP).

Efforts made by some stakeholders to reconcile them were futile as both gladiators insisted on their respective stances.

Their misunderstanding also divided the State House of Assembly as both politicians got supports from the divides in the chamber.

Obaseki who later the PDP guber candidate ticket seek reelection under the opposition party and subsequently defeated Osagie Ize-Iyamu, candidate of the APC and the preferred choice  Oshiomhole.

Despite trading words multiple times while the rift lasted, Obaseki and Oshiomhole were civil towards each other when they met in Auchi, during the birthday thanksgiving of Thomas Oleghe at Immaculate Conception Cathedral.

While speaking with journalists after the event, Obaseki said he has nothing against his predecessor, but only disagrees with his style of politics.

Oshiomhole, who also spoke with journalists, described Obaseki as “his brother and friend.”

“Once the governor speaks, the matter ends,” Oshiomhole said.

NEWS: Re-looting Allegation: No document tendered to back claims against EFCC- Witness