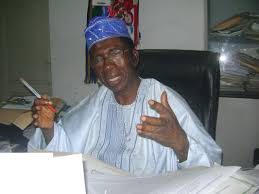 Concerned members of the Peoples Democratic Party (PDP) have berated a national chairmanship aspirant of the party, Professor Babatunde Adeniran for inviting Senator Kashamu Buruji to his official declaration for the position.

This, they said has indicated that Adeniran is not fit for the position, saying that he has shot himself on the leg by this move.

They added that Kashamu Buruji, who is representing Ogun East at the Senate, has been having serious issues with the leaders of the party both at the state and national level and that no right thinking member of the party would court his friendship.

It will be recalled that Adeniran, a Professor of Political Science and former Nigerian Ambassador to Germany, declared his interest for the party’s national chairmanship in Abuja on Thursday, September 21.

The concerned members revealed that Adeniran had shown that he is not worthy of being trusted with such a sensitive position in the party by identifying with someone, who they alleged is wanted in the United States of America for drug related offences.

“To say we are disappointed is to say the least, Adeniran should never be considered for such a sensitive position based on this costly error. It is very clear that he has no good plans for the party by inviting a man, who has been an albatross to the party to his official declaration.

“This is a man nobody in the PDP should touch with a long pole. He is one of those, who brought shame to the party and caused the likes of former president Olusegun Obasanjo to leave the party,” said a concerned member, who simply gave his name as Johnson.

Johnson insisted that it is now clear that Professor Adeniran is an opportunist and a potential loser, who just woke up one morning and thought of occupying the position of the national chairman of the party.

Some of the concerned members emphasized that this would not work and that the party has gone through enough crisis and challenges than to allow some ‘elements, who have nothing good to offer rubbish the party at this crucial time.’

They added that what the party needed now was to chart a new course and search for credible people within the system to occupy leadership positions in the party so that it could regain its lost glory and take over power at the centre from the ruling All Progressives Congress (APC).

Another reason the concerned members identified as why Adeniran should not be allowed to lead the party was the need to sell the party to members of the public as a rebranded party that has learnt it’s lessons.

They posited that any chairmanship aspirant or candidate of the party as the case may be that identifies with someone of the calibre of Kashamu Buruji should be treated like an outcast.

It was pointed out that the party is being taken to the next level to meet the expectations of the teeming Nigerians, who believe that it should come back to power to continue its good work.

“We are assuring Nigerians that we will not fail them and that people like Professor Babatunde Adeniran and his cohorts such as Senator Kashamu Buruji would not be allowed to take over the party, when we are trying to rebuild, re-strategise and reposition the party.

“Adeniran will fail, he cannot win the election, we are ready for him,” they said, and added that the people of Nigeria should trust the party not to disappoint them in their choice of the next chairman of the “largest party in Africa.” yemojanewsng.com