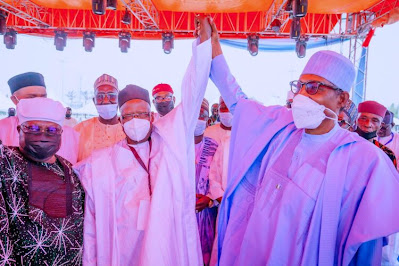 President Muhammadu Buhari has justified the emergence of former key members of the Peoples Democratic Party (PDP) as officials of the National Working Committee of the All Progressives Congress (APC), stressing that they are repented sinners.

Abdullahi Adamu and Iyiola Omisore, the new national chairman and national secretary of the APC respectively, were former chieftains of the Peoples Democratic Party (PDP).

The President in a statement issued by his Senior Special Assistant on Media and Publicity, Mallam Garba Shehu on Sunday, formally congratulated the Abdullahi Adamu-led 79-member National Executive Committee of the APC, that emerged at the just concluded convention in Abuja.

While commenting on the allegation that the new Chairman of the APC and some of the executive members were former PDP members, Buhari said, “That some of the APC’s new leadership were once in the opposition was the new line to take to the media, somehow suggesting that those who have left one party should not hold positions in another. Yet, do the Scriptures not teach us of the virtue of sinners who repent and change their ways?

“What the Scriptures say less is of sinners who repent, change their tune, and then choose to re-sin in full public view by returning to their former ways. Given that most important leaders of the opposition PDP first left the party before they returned to it, we might expect the media to ensure criticism of them is damning and absolute.

“It is incredulous that anyone would consider them trustworthy or acceptable candidates for any public office.”

The President enthused that the stage is now set for the APC primary elections later this year when the party’s new flag bearers will emerge.

“But the good voters of Nigeria can see through such acrobatics and know the facts that, when the contests for 2023 come, APC offers a track record of success and leadership, while the opposition has only decades of failure and complicity in response,” he said.