Report – Senate digs out fresh $1.151b illegal withdrawals from NLNG

The Senate on Wednesday declared it uncovered fresh illegal multiple withdrawals of $1.151 billion from the dividends accounts of the Nigeria Liquefied Natural Gas (NLNG) by the Nigeria National Petroleum Corporation (NNPC).

This is apart from the $1.05 billion NNPC Group Managing Director Maikanti Baru earlier admitted to. 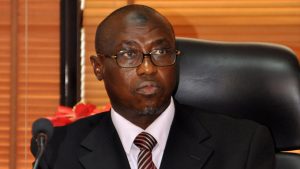 According to the Guardian NG, the investigative committee, headed by Senator Bassey Albert Akpan (PDP, Akwa Ibom North East), ordered NNPC and Central Bank of Nigeria (CBN) to submit documents on withdrawals made from the NLNG dividends account within the last two years.

While scrutinising the NLNG account documents presented to it particularly by the Chief Operating Officer (COO), Finance, of the CBN, Babatunde Adeniran, the committee observed a series of cash debits totalling $2.201 billion from November 2016 to June this year.

Others are: $650 million withdrawn on June 7, this year for offsetting Joint Venture Cash Call by NNPC, which ordinarily is supposed to be a budget item payment; and $415,063 million withdrawn also in June without a clear explanation on the purpose for which it was meant.

Angered by the illegal withdrawals, the committee chairman and members ordered the CBN and NNPC officials who represented their bosses to make available the documents approving the withdrawals.

The newspaper quoted Akpan saying: “From the available documents before us, besides the $1.05 billion we are mandated by the Senate to investigate, several withdrawals have also been made from the NLNG dividends account without required supporting documents to back them.

“This is unacceptable to us. For the fact that the GMD of NNPC and CBN Governor are not here in persons, we are not going to continue with the session today. Therefore, on a very serious note, both the NNPC and CBN must furnish this committee with other relevant documents on the withdrawals latest Tuesday next week, and the NNPC GMD, the Corporation’s Group Executive Director (Finance), Isiaka Abdulrasak and the CBN Governor, Godwin Emefiele, must appear before us on Thursday next week.”

The House of Representatives meanwhile summoned three oil firms over their alleged shady role in a N91 trillion deal.

Joseph Akinlaja (ZLP, Ondo), chairman of the House of Representatives investigative panel and head of the House committee on petroleum resources (downstream), vowed that the firms must provide answers to the “weighty allegations.”

The firms are: Chinese company, Hungbohai Petrochemical Industry Limited; Mahat Oil and Gas Limited; and Alkhairi Oil Limited. They were summoned alongside NNPC last week but failed to appear.

“We therefore summon Festus Egbuonu, also known as Boss Mao, who is the Nigerian Director of Hungbohai. We also summon Mahat and Alkhairi Oil for the third time. This committee must get to the root of the investigation because N91 trillion can make any ear tickle,” Akinlaja said.

Hungbohai Petrochemical Industry Limited was allegedly mandated by the NNPC to lift 95 trillion metric tonnes of Low Pour Fuel Oil (LPFO) from Nigeria over a period of 35 years, beginning January 2016.

Mahat Oil and Gas Limited and Alkhairi Oil Limited were alleged to have facilitated the deal on behalf of Hungbohai and NNPC.

Outside oil and gas matters, the House yesterday ordered an investigation into the spate of extrajudicial killings in the country.

The resolution followed the adoption of a motion by Mr. Kingsley Chinda (PDP, Rivers), who drew the attention of his colleagues to the murder of one of his constituents, Mr. Sepribo Black-Duke, by men of the Nigerian Army.

During proceedings presided over by Speaker Yakubu Dogara, the House mandated its committee on army to investigate similar killings with a view to bringing the culprits to book.

Frederick Agbedi (PDP, Bayelsa,), who supported the motion, claimed that residents of the Niger Delta were under siege by overzealous army personnel.

Mohammed Sani Abdu (PDP, Bauchi), who recalled his experience during a recent oversight function in Warri and Port Harcourt, said he was privy to how soldiers at checkpoints were humiliating people of the area.

“The harassment of the civil population is uncalled for. They need to deploy technology at roadblocks. Something must be wrong here. The people who are supposed to protect us are now like our enemies,” Sani said.