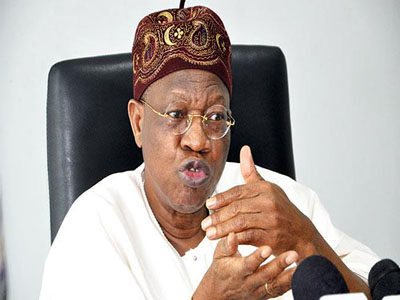 Human Rights Writers Association of Nigeria (HURIWA), has demanded for the sack of Minister of Agriculture and Rural Development, Audu Ogbeh and the Minister of Information and culture Lai Mohammed for lying to the public.

The group asked President Muhammadu Buhari in a statement released on Thursday to dismiss the two ministers for telling grievous lies.

The request for the sack of the two ministers was made in a statement released on Thursday and signed by the groups National Coordinator, Emmanuel Onwubiko and National Media Affairs Director, Zainab Yusuf.

Mr Ogbeh allegedly made a false claim that Thailand accused Nigeria of being responsible for the collapse of its seven rice mills following an alleged fall in rice importation from the country, a statement which was instantly faulted by the Thailand Ambassador to Nigeria.

HURIWA made its demand on the president over the alleged false claims by the two ministers.

The group urged the president to fire the ministers as they are “wilfully being economical with the truth in the discharge of their public functions thereby polluting the innocent minds of Nigerian Children even as disseminating false information violates the criminal code Act of Nigeria”.

According to the statement, spreading of misinformation if not checkmated through outright dismissal, is capable of eroding national ethics and could twist the impressionistic minds of Nigerian children to believe that deliberate spreading of alleged falsehoods has no consequences.

HURIWA further charged president Buhari to at least suspend Mr. Ogbeh from office and carry out further investigation within seven days on the veracity of his claims.

“We believe that Mr. President must suspend the Agriculture Minister pending further timely investigation and to order his sack eventually if contrary opinions alleging that he lied are proven as truth. The Nigerian law book even has legal sanction for providing false information and since the law is not a respecter of status or a class, the minister(s) of Agriculture and information must be made to face the consequences of wilful misinformation.”

“The current President has claimed to be a man of honesty and so Nigerians are disappointed that his cabinet members have lied to Nigerians in not less than 10,000 times documented in media reports with the current controversy involving the Agriculture and Information Ministers being the most disgraceful acts of alleged betrayal of truth and public trust and amounts to criminal violation. Section “125A subsection (1)” of the criminal code, affirms that: Any individual who gives any information which he knows or believes to be false, to any person employed in the public service with the intention of causing such person to do or omit to do anything which such person ought not to do or ought not to omit to do if the true facts concerning the information given were known to such person; or (b) to exercise or use his lawful powers as a person employed in the public service to the injury or annoyance of any other person, is guilty of an offence and liable to imprisonment for one year,” the group said.