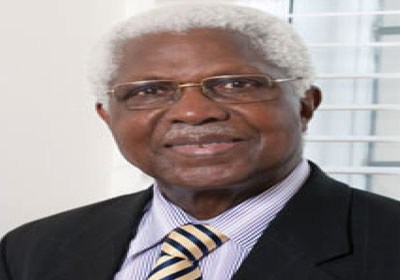 His brother and the traditional ruler of Oko in Anambra State, Igwe Laz Ekwueme, said the former Vice President, died by 10:00pm in a London clinic, on Sunday.

In a statement, he said: “Ekwueme family regrets to announce the peaceful passing away of their patriarch, the former Vice-President of the Federal Republic of Nigeria Dr Alex Ifeanyichukwu Ekwueme GCON.

The 85-year-old architect was the first elected Vice-President of Nigeria. He served in office from 1979 to 1983.

Several weeks ago, he slumped in his Enugu residence. He was  immediately taken to the Memfys Neurosurgery Hospital Enugu, where went into coma.

As soon as he was stabilised in the hospital he was flown to London in an air ambulance last week, as ordered by President Muhammadu Buhari.

Ekwueme who was Vice President  to President Shehu Shagari was ousted in a coup staged by military officers led by  Brigadier  Muhammadu Buhari on 31 December 1983.

He is the Ide of the Oko kingdom in Anambra State, where his younger brother, Lazarus, is the traditional ruler.

He was also honoured by the council of Traditional Rulers in the old Aguata as the Ide of Aguata Local Government Area of Anambra State comprising forty-four (44) towns.

Ekwueme is a distinguished architect who started his professional career as an Assistant Architect with a Seattle-based firm, Leo A. Daly and Associates, and also with the London-based firm Nickson and Partners.