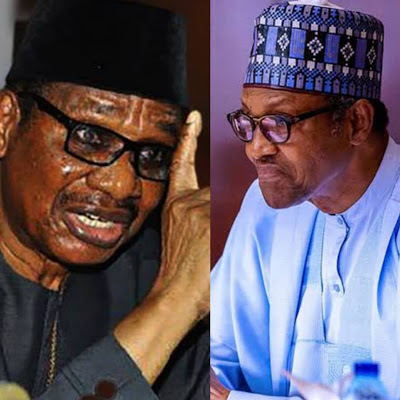 …How can a deputy national secretary have the ambition to be the chairman of a party when you have deputy chairmen and vice-chairmen?

He said Giadom had no right to summon the meeting because a deputy national secretary is not in line to succeed the national chairman.

Aside from this, Sagay, who is the chairman of the Presidential Advisory Committee Against Corruption (PACAC), added that the ex-parte order Giadom is relying on to claim acting chairmanship had since lapsed.

He said: “I’m stunned by this turn of events. How can a deputy national secretary have the ambition to be the chairman of a party when you have deputy chairmen and vice-chairmen?

“That is why it is absurd. It does not make sense. His position makes it impossible for him to be the acting national chairman.

“Second, he is relying on an ex-parte order in which he alone was present and the court gave him an interim order in March. These orders last for 14 days.

“He turns up in June to say it has been extended – something that is dead, that does not exist and has lapsed. That is the second absurdity. If he had applied for a fresh order, that would have been different.

“When I heard of the developments, I was stunned into silence. I’m so stunned as to how such a person could be given legitimacy at the highest level.

“The legal advice the President got is mischievous in the extreme because there is no court order to extend since it does not exist. It died two weeks after it was made. The line of succession of the chairman cannot come from the Secretary.

“So the whole thing is an absurdity. I always hear of the theatre of the absurd, but this is one of the worst I’ve ever heard of.”

Asked if he would advise the President to reconsider his position, Sagay said: “That’s my view. And as someone pointed out, seven days’ notice is needed for such a meeting. Only three days have been given.

“So I would advise the President to step back from this matter and not participate in it.”

For Seyi Sowemimo (SAN), it was essentially a political matter and the President had taken a decision in furtherance of what he felt was in his best interests.

“A president in opting to recognise somebody is also acting in his own best interest. It’s not strictly a legal matter; it’s all politics.

“If you go to a third court, don’t be surprised that another conflicting decision may be given,” Sowemimo said.

He blamed the courts for the conflicting decisions and confusion.

“We have been complaining about these judges: it’s only for elections and petitions that we come with contrary injunctions flying here and there.”

Sowemimo noted that some judicial decisions seem to be giving the impression that the courts are abandoning their former stance of non-involvement in party affairs.

He said: “The decision of the courts in previous years was not to get involved in the internal affairs of political parties, but I am beginning to think that there is more to the involvement of the judges than meets the eye, because there’s that feeling that the judges themselves seem to be interested. Otherwise…they shouldn’t be speaking with different voices.

“In recent years, our courts have not been as reliable as they should, in terms of giving clear cut decisions on issues of law.

“Look at the case involving the governorship in Imo and Bayelsa states; people were disappointed at the outcome.

“So, it’s politics and personal interest amongst politicians and they have only just managed to drag the judiciary into the fray.”

The move to hold NEC meeting in a bid to resolve the crisis in the APC appears to have widened the cracks.

Giadom, in a notice of meeting which he signed, said “having been duly authorized by court order to act as national chairman and to preside over all meeting of the NWC and NEC, hereby reconvene the NEC meeting that was earlier billed to hold on the 17th of March 2020 but was postponed.”

He said the meeting “shall hold by virtual means,” in keeping with COVID-19 guidelines.

President Buhari, according to a statement by his media aide Mallam Garba Shehu, said he “received very convincing advice on the position of the law as far as the situation in the party is concerned and has determined that the law is on the side of Victor Giadom as Acting National Chairman.

“Because we will always act in accordance with the law, the President will be attending the virtual meeting Giadom called for tomorrow(today) afternoon.

“We urge the media to stop promoting manufactured controversies and to not give any further room for mischievous interpretations of the law on this matter.

“In addition to the President, the Giadom meeting will, hopefully, be attended by our governors and the leaders of the National Assembly.”