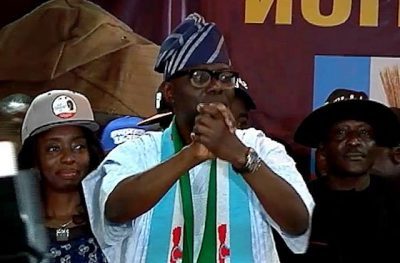 Governorship candidate of the All Progressives Congress (APC) in Lagos State, Mr Babajide Sanwo-Olu, on Thursday held an interactive session with traders and Igbo community in the Computer Village.

The News Agency of Nigeria (NAN) reports that the interactive session was to offer a hand of fellowship and foster unity among the leadership of the village.

Sanwo-Olu while addressing the traders, said that it was the responsibility of government to provide power and internet for a technological hub, especially the biggest in West Africa which is the Computer village.

According to him, constant power supply and effective internet service for the hub will also be a priority of the government of Lagos State.

”The government will make it a point of duty that prepaid meter is given to everyone and no more estimated bill.

”This place is the biggest computer village in the world, we have potentials here, Facebook can come out from here likewise Google.

”What the government is supposed to do is to sit with your leaders and find out what the problems are and look for solutions to it.

”Government is for everyone, we are not about people that divide, together we are stronger like brothers and sisters,” Sanwo-Olu said.

The leader, Ndi-Igbo in Ikeja community and Computer village, Mr Tony Nwakeze, said that the interactive session with the Igbos was a welcome idea.

”Sanwo-Olu is a young man who understands the needs of the people.

”We believe in him and trust he can deliver and through our interaction with him we have seen his zeal for the people,” he said.

The Chairman, Yoruba Forum, Mr Tunde Aremu, said that Sanwo-Olu’s coming was to identify with the traders in Computer village.

“This is an interactive session between the Igbos, Computer Village and Babajide Sanwo-Olu. He is somebody we will like to work with and by God’s grace we pray that he gets the victory,” he said.

Mr Godfrey Nwosu, President, Phone and Allied Products Dealers Association of Nigeria (PAPDAN), said it was the first time the APC gubernatorial candidate would be identifying with Igbos in the Computer village.

Nwosu said that he was impressed that the Igbos were recognised knowing that they had the largest population in the market.

”I believe going forward, after the event of today, we have tried to move the heart of the candidate in respective of what happened at the last election.

”A lot of us have moved on because basically speaking, there is an adage which says where your treasure is that is where your heart lies.

”We are business people and beginning to play political business and have to do things that pay us with our business.

“We do not want situations where policies will impede on our business.

”We live in Lagos, most of us were born, grew up here and married their peers so it is time to extend a hand of fellowship, so that Nigeria will be better for it,” he said.

NAN reports that the interactive session was the aftermath of the election violence that ensured in some parts of Lagos on Feb. 23.