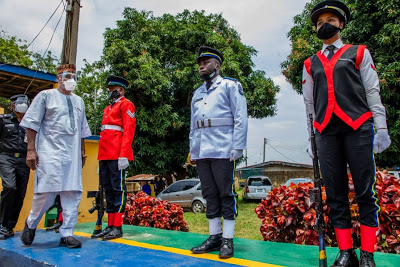 The Kwara State Governor, Abdulrazak Abdulrahman, has inaugurated the state Community Policing Advisory Committee (CPAC) as part of efforts to strengthen internal security in the state.

Chief Press Secretary to the governor, Rafiu Ajakaye, stated this in a statement issued on Tuesday.

The development is in line with President Muhammadu Buhari’s directive to immediately commence the implementation of community policing strategy across the country after the approval of N13.3 billion naira earlier this month.

Recall that the federal government inaugurated a 14-man committee to see to the implementation in 2019. Many states including Lagos, Rivers, Plateau, Enugu, Sokoto have also followed suit.

Ajakaye, in the statement, said “In February this year, our administration held a multi-stakeholder security dialogue on strengthening the existing security architecture in the state and exploring community initiatives.”

He noted that the committee will herald the commencement of the initiative in the state.

“This advisory committee will serve as another platform to engage local communities on matters of safety.

“I believe that community policing is an idea that is long due as our country tackles varying security challenges. It focuses more on using intelligence and constant interactions with the community folks to prevent crimes. However, what this means is that the success of this idea lies in everybody seeing security as our collective business,” Ajakaye said.

Members of the committee are assured of the state government’s cooperation and support to make the take-off of community policing a huge success, the spokesperson added.