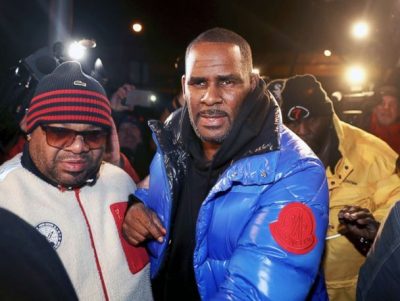 A Chicago judge ordered $1 million bond for R. Kelly on Saturday after the singer was charged with 10 counts of aggravated criminal sex abuse.

Cook County Judge John Fitzgerald Lyke Jr. also ordered Kelly to turn in his passport and forbade contact with the singer’s alleged victims. Kelly was indicted on Friday for a decade of sexual assault and abuse against four victims, three of whom were under the age of 17. Bail was set for $250,000 for each case.

Kelly’s attorney Steve Greenberg told ABC News outside of the courtroom that his client is strapped for cash and cannot afford the $100,000 bond to get out this weekend.

Kelly did not react during the hearing. He sat with a straight look on his face, wearing a black hooded sweatshirt with his hands crossed behind his back throughout the hearing. Kelly only spoke with his lawyer while Lyke reviewed the charges, calling the prosecutors’ claims “disturbing.”

Greenberg told the judge his client wasn’t a flight risk because “contrary to the song [‘I Believe I Can Fly’], he doesn’t like to fly” Greenberg added: “He can’t go anywhere anyways. He’s a recognizable person.”

Kelly’s “finances are a mess,” citing a child support judgement and no ability to generate residuals, said Greenberg. He’s expected back in court on Feb. 25.

The 52-year old embattled star, whose given name is Robert Sylvester Kelly, had turned himself into Chicago police late Friday. A booking photo showed Kelly in a black hooded sweatshirt sporting a salt-and-pepper beard.

Kelly’s supporters Joycelyn Savage and Azriel Clary, who are living with the singer, attended the hearing. Parents of both women, claimed in the Lifetime series “Surviving R. Kelly,” that Kelly is holding their daughters against the women’s will. The three-part documentary chronicled decades of troubling allegations and brought renewed media attention and scrutiny on the singer.

The women initially sat one row in front of Azriel’s father, Angelo Clary, who tried to speak with them. They both ignored him, never acknowledging him or even turning around. Then they changed seats, moving one row ahead to avoid him. Avenatti, who said he has six clients related to Kelly, comforted Azriel’s mother after they were rejected by their daughter.

Several other people — men and women — stood in the last two rows in support of Kelly.

Jerhonda Pace — one of Kelly’s accusers — was also in attendance.

The alleged criminal behavior dates back to May 1998 and continued until January 2010, said Cook County State’s Attorney Kimberly M. Foxx announced at a press conference on Friday. The indictment details accounts of vaginal and oral penetration of and ejaculation onto the victims by the singer.

“Aggravated criminal sexual abuse is a Class 2 felony with a sentencing range of 3-7 years and is probationable,” Foxx’s office wrote in a statement.

Michael Avenatti, who said he is representing six people related to the case, left the courthouse in a black SUV seeming optimistic that Kelly will “spend the rest of his life” in prison.