After shooting, Florida to station police officer at every school 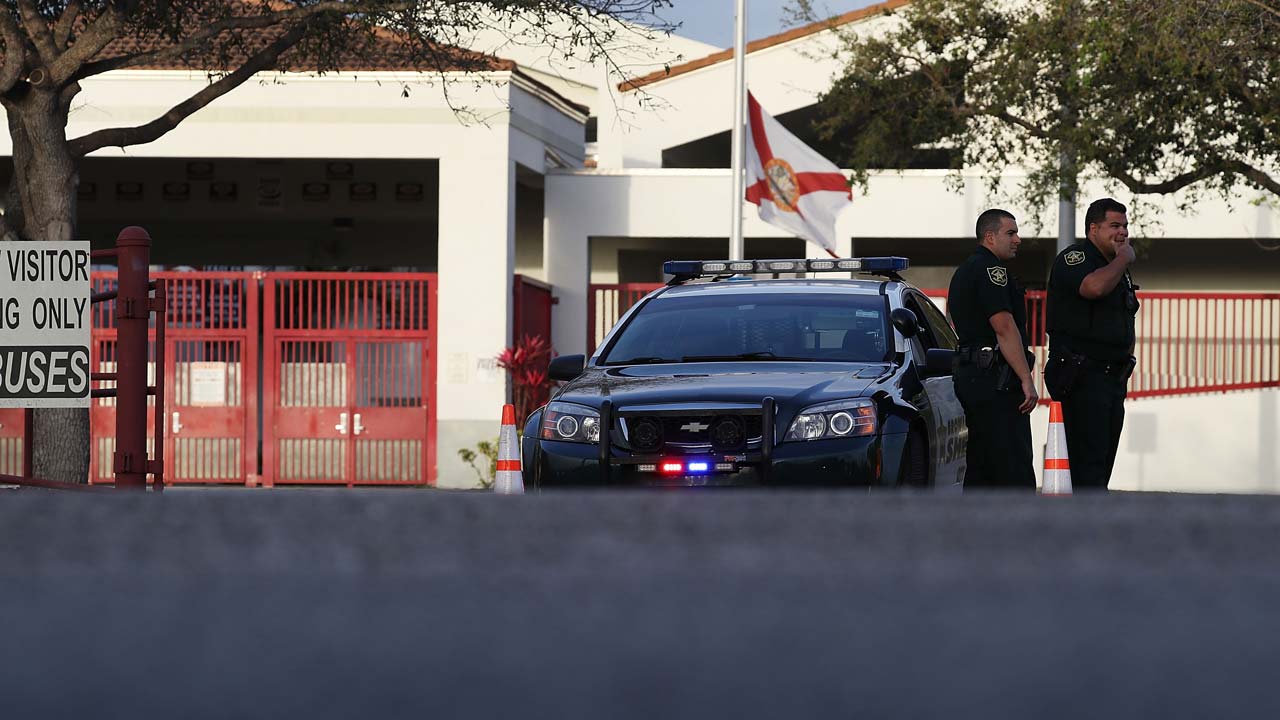 A police officer will be stationed at every public school in Florida, the state’s governor announced Friday as part of a plan to improve security following last week’s deadly high school shooting.

President Donald Trump repeated his call, meanwhile, for arming some of America’s teachers and claimed the controversial proposal was increasingly drawing support.

The push to make schools safer came as the local sheriff’s office released details of nearly two dozen visits to the residences of Nikolas Cruz, the 19-year-old behind the assault at Marjory Douglas Stoneman High School in Parkland, Florida.

Speaking at a news conference in the state capital Tallahassee, Republican Governor Rick Scott unveiled a $450 million security plan in response to the Valentine’s Day rampage.

“There is nothing more important than the safety of our children,” Scott said. “We must take care of our kids.”

“I am proposing at least one law enforcement officer for every 1,000 students,” Scott said of putting police in public schools.

Asked about Trump’s proposal that teachers carry concealed weapons, Scott replied: “My focus is on providing more law enforcement officers, not on arming the teachers.”

Scott proposed a ban on “bump stocks” — an accessory which turns a semi-automatic weapon into an automatic one — and making it easier for courts “to prohibit a violent or mentally ill person from purchasing or possessing a firearm.”

Scott also said the age for gun buyers in the state would be raised from 18 to 21 — a move opposed by the powerful National Rifle Association (NRA) gun lobby.

The governor stopped short, however, of endorsing a ban on assault weapons — a demand of many of the teenagers who survived the shooting at Stoneman Douglas that left 14 of their classmates and three staff dead.

“I know there are some who are advocating a mass takeaway of Second Amendment rights for all Americans,” Scott said — referring to America’s constitutional right to bear arms. “That is not the answer.”

“Keeping guns away from dangerous people and people with mental issues is what we need to do,” he said.

Trump also does not support a ban on semi-automatic weapons and in a speech to a conservative gathering near Washington, he returned again to his idea of arming teachers.

‘Shot the hell out of him’

“Maybe 10 percent or 20 percent of the population of teachers,” he said. “Not all of them, but you would have a lot.

“And the beauty is it’s concealed,” Trump said.

Referring to Cruz, the Stoneman Douglas assailant, Trump said “a teacher would have shot the hell out of him before he knew what happened.”

Trump claimed his proposal to arm teachers, which has been strongly criticized by the nation’s largest teachers’ unions, was drawing support.

“Since I started this two days ago, a lot of people that were totally opposed to it are now agreeing,” he said. “They don’t want their students to be killed or to be hurt.”

Trump proposed measures preventing the mentally ill from obtaining weapons and to “really strengthen up background checks” for gun buyers.

“And I really believe that Congress is going to get it through this time,” he said.

Lawmakers in Washington have been deadlocked on the gun debate, accomplishing nothing despite a spate of mass shootings and polls showing Americans support stricter gun laws by a two-to-one margin.

Trump also criticized by name the sheriff’s deputy who allegedly failed to take action against Cruz during the shooting spree, saying he had been a “coward.”

Scot Peterson has resigned after being suspended without pay.

Three other Broward Country Sheriff’s deputies also stayed outside the school and did not enter as the crisis unfolded, US media reported.

The Wall Street Journal obtained a transcript of a call from a tipster to the FBI more than one month before the massacre, in which she expressed concern Cruz would “get into a school and just shoot the place up.”

The FBI has said it received such a call, which did not lead to any law enforcement followup, from a person close to Cruz, but it was the first time the details were made public.

The 19-year-old had amassed multiple guns following his mother’s death in November, and had posted on social media that “he wants to kill people,” the caller said, describing a history of disruptive and violent behavior.

The sheriff’s office also released details of 23 calls to the various homes where Cruz lived over the past nine years.

The earliest call dates from November 2008 when Cruz, then nine years old, threw a rock at another boy who had thrown a rock at him.

Other calls to the police were from Cruz’s late mother, Linda, after she was involved in altercations with her son or he was fighting with his brother.

Two of the most disturbing calls — in February 2016 and November 2017 — were tips that Cruz was armed and may be planning to attack a school.

The sheriff’s office said an internal investigation was underway into how those calls were handled.