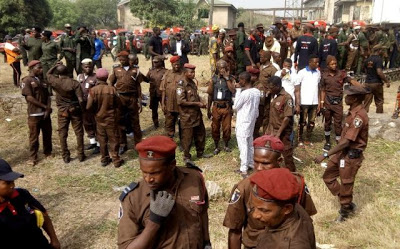 The Houses of Assembly of states in the South-West Region of Nigeria are set to fast track hearing to bill on ‘Operation Amotekun’, the Western Nigeria Security Network (SWSN).

The houses of assembly of the six South-West states are Lagos, Oyo, Osun, Ogun, Ekiti and Ondo states.

The lawmakers in these states have urged their respective governors not to delay in sending the bill to them for consideration and passage into law, The Punch NG reports.

Operation Amotekun was launched in Ibadan, the Oyo State capital on January 9, 2020, by the six governors of South-West Nigeria to provide security for the people following protracted spate of killings and kidnapping in the region.

The decision to establish the ‘security outfit’ was agreed upon and made at a summit convened by the Development Agenda for Western Nigeria (DAWN) in June 2019 before it was eventually launched in 2020.

However, the Minister of Justice and Attorney General of the Federation, Mr Abubakar Malami, had in his reaction to the launch of ‘Operation Amotekun’, described the move as illegal, saying that the South-West governors did not consult his office before going ahead to launch the security outfit.

The AGF’s statement which generated reactions from eminent indigenes of the South West Region was later brought to a halt after governors of the region met with Vice President Yemi Osinbajo, the AGF and the Inspector-General of Police, Mohammed Adamu, and resolved to come up with a framework that would provide backing to the regional security outfit.

Lawmakers in the six states of the region are now urging their respective governors to speedy up with the process of the bill for quick passage into law and enable the operation of Western Nigeria Security Network – ‘Operation Amotekun’.