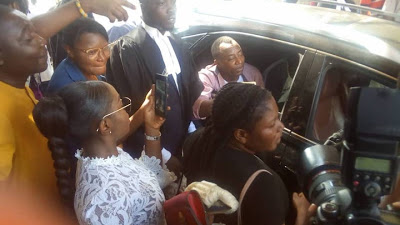 Minister of Justice, Abubakar Malami, on Wednesday, disclosed that the federal government has ordered an investigation into Friday’s invasion of the federal high court in Abuja by the operatives of State Security Service (SSS).

Operatives of the SSS had invaded the court on Friday in a bid to rearrest the convener of #RevolutionNow Movement, Omoyele Sowore.

The secret security agency eventually rearrested Sowore barely 24 hours after he was released from detention where he had spent 124 days.

This had sparked outrage within and outside the country. But the presidency defended the SSS, saying Sowore became a person of interest to the agency after calling for revolution.

However, when he visited John Tsoho, chief judge of the federal high court, on Wednesday, Malami announced that the investigation of the action of SSS was ongoing.

“Whatever affects the integrity of the court is a worrisome issue for us… I can never be preemptive of an incident over which I was not a live witness to,” he said.

“But one thing I am certain of is that the government has put in place mechanism for investigation of the reported incident.

“So, I would not like to be preemptive in terms of a conclusion, one way or the other, without allowing the consummation and conclusion of the investigation process.”

Asked to comment about the rearrest of Sowore who had been granted bail by two courts, Malami said: “It is about tradition and not a coincidence but then the truth of the matter is, I’m not here about Sowore’s case. I’m here to visit his lordship to congratulate him over his appointment but one thing about the judicial process, I think it is not the only case that the federal government is involved.

“As you rightly know, we have multiple cases and more serious cases than that of Sowore pending before the court generally, so the case of Sowore is certainly not an exception, so I cannot be here for an exclusive case.”