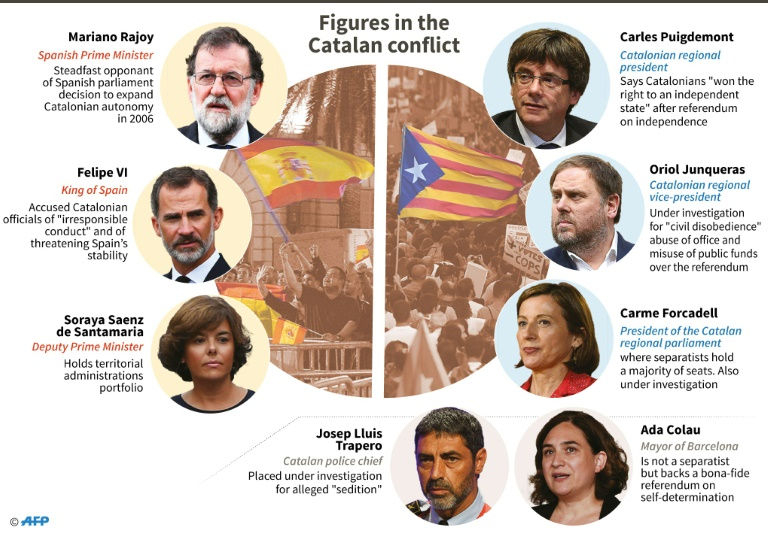 AFP     Spain was preparing Friday to seize powers from Catalonia’s separatist government, pushing for regional elections as a way out of the country’s worst crisis in decades.

Prime Minister Mariano Rajoy said a “critical point” had been reached and that his government had to act to stop the rule of law being “liquidated” as Catalan leader Carles Puigdemont refuses to drop his threat to declare a breakaway state.

Catalonia, a wealthy northeastern region that is fiercely attached to its own language and culture, held a chaotic referendum on October 1 on whether to split from the rest of Spain.

The standoff between Puigdemont and Rajoy has since sparked huge street rallies, worried investors as Spain emerges from the financial crisis, and added to the woes of a European Union already grappling with Brexit.

On Friday, hundreds of separatists queued at banks and cash machines in Catalonia, taking out large amounts of cash in protest against Madrid.

Taking Spain into uncharted legal waters, Rajoy’s cabinet is due to meet Saturday to set out the specific powers it plans to take away from Catalonia, which currently enjoys wide autonomy including control over its own policing, education and healthcare.

“All the measures we take we will announce tomorrow,” Rajoy told a press conference in Brussels, where German Chancellor Angela Merkel and French President Emmanuel Macron have given him strong backing.

Autonomy is a hugely sensitive issue in Catalonia, which saw its powers taken away under Spain’s military dictatorship.

There are fears of unrest if Madrid seeks to erode it, and Puigdemont has warned any such move could push regional lawmakers to declare unilateral independence.

– Elections on the cards? –

Calls are mounting amongst major political parties — who have overcome their differences to work together on preventing a break-up of Spain — for fresh elections in the Catalan parliament, which has been dominated by separatists since 2015.

Polls would give voters a say on Catalonia’s future in a way that was sanctioned by Madrid, unlike the referendum, which was ruled unconstitutional and saw a heavy police crackdown.

“The logic is that this process leads to elections,” said government spokesman Inigo Mendez de Vigo.

Carmen Calvo, the chief negotiator for the Socialists, confirmed that the government and opposition agreed that elections should be called as early as January.

In Barcelona, independence supporters queued at bank counters and cash machines in protest at the central government and at banks that have moved out of Catalonia, as the crisis sends jitters through one of Spain’s most important regional economies.

Some protesters were making symbolic withdrawals of 155 euros ($183) — a reference to Article 155 of the constitution, the never-before-used measure that Madrid is employing to start taking control over Catalonia.

Others were opting for 1,714 euros ($2,023) in a nod to 1714, a highly symbolic date for independence supporters marking the capture of Barcelona by the troops of King Felipe V, who then moved to reduce the rights of rebellious regions. AFP