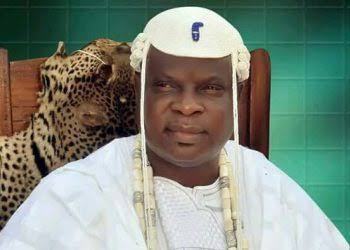 The palace of Olota of Otta has reacted to Alake of Egba, Oba Gbadebo Adedotun’s claim of consenting to the choice of His Royal Majesty, Oba Professor Adeyemi Obalanlege in the process of installing the present Awori monarch.

Alake’s palace had reportedly released a document addressed to the former governor of Ogun State, Senator Ibikunle Amosun in 2017 claiming Oba Adedotun consented to the choice of Oba Obalanlege as the choice of the Otta kingmakers.

Responding to the claim, in a communiqué signed by Prince Adeyemi Sulaiman Olusesi, the personal assistant to Oba Obalanlege, the Olota of Otta and made available to newsheadline247, the palace said, the present Olota of Otta did not seek for the consent of Alake of Ake, Abeokuta South before ascending the throne of his forbears.

Olota’s palace also asked the Alake of Ake to desist from self-disgrace by claiming the Egbas once conquered the Aworis hence the right of the latter to administer chieftaincy and traditional activities on Awori soil.

Olusesi recalled that the Olota of Otta stool supersedes that of Alake of Ake because the first Olota was crowned in 1621 while the first Alake was crowned in the year 1854 adding that a visit to the source, Ile Ife, will provide better clarification.

Olusesi also called on security agencies to caution Alake of Ake on his provoking moves particularly on chieftaincy affairs of Aworiland.

Here is the full text of the statement

Re: Letter of Consent from Alake of Ake to the Immediate Past Governor of Ogun State, Sen. Ibikunle Amosun

The Palace of the Olota of Otta wouldn’t have responded to the purported consent letter in circulation claiming that Alake of Ake, HRM Oba Gbadebo Adedotun consented to the installation of the current Olota of Otta, HRM Oba Professor Adeyemi Obalanlege (Lanlege Ekun II, Arole Iganmode-Ogunfunminire) but it becomes necessary for the sake of the innocent readers who may not know that it was a cooked document.

To set the record straight, the present Olota of Otta did not seek for the consent of Alake of Ake, Abeokuta South before ascending the throne of his forbears. Luckily enough, all the kingmakers (Olota-in-Council) that took part in the selection process at Ado-Odo/Ota Local Government secretariat are still alive.

There was no letter from the kingmakers (Olota-in-Council) to Alake requesting for his (Alake) consent/asking him to write the Governor that he has consented to the selection of Prof. Adeyemi Obalanlege as the Olota of Otta.

The present Olota was elected on Tuesday, 28th November 2017 in the presence of all the constitutionally recognized observers(Alake of Ake not inclusive), the then Prince Dr. Adeyemi Obalanlege secured all the five(5) votes from the Kingmakers to beat other 21 vibrant princes from Ijemo-Isoloshi Royal Family. All that matters were asked to append their signatures without any line for Alake of Ake, Abeokuta South Local Government or his representative.

Kabiyesi Alake of Ake, Abeokuta South should show the world the copy of the letter that was sent to him requesting for his consent for the installation of Olota of Otta. It is right to say Alake is looking for relevance for acting on a matter he was not involved.

I am equally disappointed that Alake of Ake could be citing conquest in this 21st Century at a time our nation, Nigeria will be celebrating her 59th Independence Anniversary in the next few months.

If the claim of Alake of Ake is something to go by, Alaafin of Oyo would be installing Baale’s and Obas across virtually all the Yorubaland today citing Old Oyo empire.

Alake should stop disgracing himself, he should equally show the world where his family land is situated in Otta, I will show him receipts of purchase from the Awori family who sold the land to him. We are the “Afikoti yo Oju Egba”, we have dealt with them in the past and we are much ready to place them where they truly belong.

It is unarguably that Olota stool supersedes that of Alake of Ake because the first Olota was crowned in 1621 while the first Alake was crowned in the year 1854. We can as well visit Ile Ife where we both came from for better clarification.

The creation of the council and others in the state was strictly for administrative convenience, why is it that Olofin Ado-Odo is not a member of Egba Traditional Council having claimed that the Egba conquered Ado-Odo in the press release that emanates from Ake Palace. Today, Olofin Ado-Odo, Oloja Ekun of Igbesa and others are members of Yewa Traditional Council and that does not mean that they have been conquered by the Yewa’s in the past/they are Egbado (Yewa) but core Awori towns.

Judiciarily, Obada Oko, Itori, Ifo, Lapoleke, Abalabi, Papa, Sunwe and others are all under Ota Judiciary Division till date. We have not gone to these areas to install Obas and Baales hiding under Judicial Division Head which was also created for administrative convenience.

The State Government should as a matter of urgency call Alake of Ake to order and the security agencies to please caution Alake of Ake for his provoking moves.

Personal Assistant to His Royal Majesty, Olota of Otta.