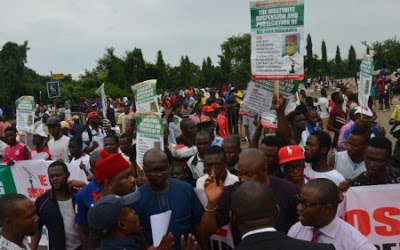 Scores of protesters early yesterday stormed the National Assembly asking the lawmakers in both chambers to put an end to constituency projects.

The protesters who in stormed the National Assembly large numbers also demanded that the Senate President, Bukola Saraki, and Speaker, House of Representatives, Yakubu Dogara, resign from their positions.

The protesters under the aegis of the National Convener of Citizens’ Action to take back Nigeria (CATBAN) carried placards with various inscriptions, including, “Nigerians are not represented in the sharing of loots via constituency projects”, “Dear legislators, to make laws is not to execute projects, legislators are not executives.”

According to him, “The concerns are indications that Saraki and Dogara lacked credibility and moral capacity and, as such, should resign.“ The President told Nigerians that our federal legislators connived among themselves and removed priority developmental projects carefully prepared by the Federal Government to impact on the lives of the citizenry.

“The National Assembly made cut of N347 billion in the allocations to 4,700 projects submitted to them for consideration and introduced 6, 403 private projects of their own amounting to N578 billion.” According to him, it is painful that this year’s budget followed the regular path of “stealing in the bogus constituency projects.”

“In spite of the wishy-washy response of the National Assembly justifying its distortion of the 2018 budget, there is ample evidence to show that they shortchanged their constituents who elected them to make laws for the good governance of the country.“

“This is one big scandal that brings to light how the nation’s annual budgets have been padded over the years to the disadvantage of 180 million Nigerians,” Wala said.
The group urged the Economic and Financial Crimes Commission (EFCC) and the Independent Corrupt Practices Commission (ICPC) to probe the National Assembly. The protest later turned rowdy as protesters claimed that the leadership of the National Assembly ignored them.

In anger, some were seen making efforts to climb the main gate as others forced their way onto the premises. But they were repelled by security operatives who tear-gassed them.

While signing the 2018 budget, Buhari had said “the logic behind the constitutional directive that budgets should be proposed by the executive is that it is the executive that knows and defines its policies and projects. Unfortunately, that has not been given much regard in what has been sent to me.

“The National Assembly made cuts amounting to N347 billion in the allocations to 4,700 projects submitted to them for consideration and introduced 6,403 projects of their own amounting to N578 billion”.

Against this background, Buhari complained that many of the cut projects are critical and may be difficult, if not impossible, to implement with the reduced allocation. Meanwhile, the Senate has urged President Buhari to immediately begin the full implementation of the budget. At its first sitting upon resumption from the Sallah break yesterday, the upper chamber condemned the protests against the National Assembly over constituency projects.

It specifically charged the president to investigate the alleged involvement of a serving minister and a state governor in the sponsorship of the protest. Senate President, Saraki, had while reading a welcome address to the senators, declared that growing internal tensions were a reflection of the economic condition of the citizenry.

“Happily, the 2018 budget has been signed by the president. We call on the Executive to expedite the release of funds for the budget implementation so that our people can begin to see the positive impact in their lives without delay,” he said. The Senate said those who sponsored the protests were destroying the sanctity of parliament.
Lawmakers who contributed to a motion sponsored by Senator Barnabas Gemade (APC, Benue State) lamented that people in government could be sponsoring protest against the National Assembly because of the issue of constituency development projects which they said were the only government projects that cut across the country.

Gemade described the sponsors of the protests as ignorant of parliamentary operations, pointing out that no amount of blackmail would stop the National Assembly from approving money for constituency projects.

According to him, unlike heads of Ministries, Departments and Agencies (MDAs), senators now “go with cap in hand to beg ministers to finance their constituency projects. This is shameful and this has to stop.”

His position was supported by the Deputy President of the Senate, Ike Ekweremandu, who blamed the protest on unemployment and poverty.