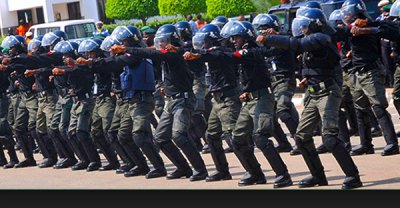 The police in Nigeria have emerged as the most corrupt public institution in the country, according to a new survey released today by Socio-Economic Rights and Accountability Project (SERAP).

The power sector was ranked second in the survey’s corruption index, which examined five public institutions in Nigeria in the last 5 years.

Other public institutions identified as corrupt by 70% of Nigerians surveyed are: the judiciary, education and health ministries. The survey reveals that the level of corruption has not changed in the last 5 years.

According to the survey, “a bribe is paid in 54% of interactions with the police. In fact, there is a 63% probability that an average Nigerian would be asked to pay a bribe each time he or she interacted with the police. That is almost two out of three.”

Professor Akin Oyebode who chaired the launching of the report said: “Nigeria is looked upon as a giant of Africa. Yet Nigeria could not conduct free, fair and credible elections. It is a smear on the image of Nigeria. If we do away with selective enforcement and condonation of corruption, we will build and live in a better society. Corruption is a refined form of stealing. The politicians are stealing our common patrimony. Development of the people is almost inversely proportional to the level of corruption.”

The survey identified Corruption as a significant impediment to law enforcement, access to justice and basic public services such as affordable healthcare, education, and electricity supply.

“Several Nigerians have to pay a bribe to access police, judiciary, power, education and health services. Corruption is still a key concern in the country with 70% of Nigerians describing the level of corruption as high and in the same measure, stating that corruption levels either increased or remained the same in the last five years.”

“The national survey carried out between September and December 2018, covered the police, judiciary, power, education and health sectors to assess the state of corruption in law enforcement and public service provision.”

“Bribery experiences were interrogated and recorded in the key sectors of education, health, the police, judiciary and power. Data analysis was conducted under five different and interrelated variables. There was a 63% probability that an average Nigerian would be asked to pay a bribe each time he/she interacted with the police. The likelihood of bribery in the power sector stood at 49%. With the chances of encountering bribery at the judiciary, education and health services standing at 27%, 25% and 20% respectively.”

“The police were the most adversely ranked on this indicator. For every 100 police interactions reported by the respondents, there was a bribe paid in 54 interactions. The prevalence levels stood at 37% in the power sector and 18% in education,17.7% in the judiciary and 14% in the health sector.”

“51% of the individuals that paid bribes to the police and 35% to the power sector believed this was the only way to access the services sought from the institutions. The ranking of the education sector and the judiciary was less adverse with 16% perceiving bribery as the main avenue of accessing services in the institutions, and health services recording 13%.”

“The police and judiciary had the largest proportion of total bribes paid at 33% and 31% respectively. Bribes paid for education, power and health services accounted for 19%, 10.9 and 5% respectively of all bribes reported. The average amount of bribe paid by the respondents was highest among those who paid to the judiciary at about Naira 108,000 (US$ 298). All the other institutions ranked lower on this variable with Naira 12,253 and 11,566 reportedly paid to the police and education sectors, and Naira 6,462 and 5,143 paid for health and power services respectively.”

“This assumption is buttressed by the finding that 82% of the actions taken were either not responded to or deemed sufficiently appropriate. Low civic action may also indicate low levels of public awareness on what redress mechanisms exist or how to access them.”

“The Federal government should establish an independent commission of inquiry to conduct a transparent, comprehensive, and impartial investigation into systemic corruption within the Nigeria Police Force, judiciary, and the ministries of power, education and health.”

“The Chief Justice of Nigeria and the National Judicial Council should identify and review all outstanding cases of judicial corruption and refer such cases to appropriate anti-corruption agencies. They should apply the Code of Conduct for Judicial Officers in a consistent and transparent manner, with full respect for the fundamental guarantees of fair trial and due process.”

“The Chief Justice of Nigeria and the NJC should publish annual reports of all activities involving the judiciary, including expenditure, and provide the public with reliable information about its governance and organisation, including the number of judges found to be corrupt, as well as ensure that the Chief Justice of Nigeria and all other judges make periodic asset disclosures.”

“The National Assembly should move swiftly to amend the Code of Conduct Bureau and Tribunal Act to ensure public access to asset declarations made by public officials, and urgently pass the Proceeds of Crime Bill, the Whistleblowers Bill, and the Witness Protection Bill among other relevant pieces of legislation.”

“A positive legacy by the in-coming administration on 29 May 2019 and the recently appointed Inspector General of Police will mean improving accountability of the police, and proactively working to end all forms of corruption within the rank and file of the police. The Inspector General of Police should streamline and prioritise internal control mechanisms by establishing an Ethics and Integrity Unit at each police station. The unit should include a human rights officer, an anti-corruption officer, and an officer responsible for service delivery complaints.”

“The survey targeted a total of 2,655 respondents selected from seven states spread across the six geo-political zones of Nigeria and the capital city of Abuja. The sample was proportionate to population size across these zones. The survey covered the police, judiciary, power, education and health sectors to assess the state of corruption in public law enforcement and service provision.”

“Data for the survey was collected through a survey among ordinary citizens picked through simple random sampling of Nigerians above 18 years; in-depth interviews with key governance experts including representatives of national anti-corruption bodies, trade unions, the business community, media, lawyers, academia, people living with disability and university student leaders; and a review of the legal and institutional frameworks guiding anti-corruption efforts in Nigeria to assess their effectiveness.”