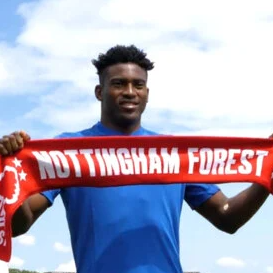 Super Eagles striker, Taiwo Awoniyi has joined newly promoted Nottingham Forest in the English Premier League for a club-record fee of about £17 million.

This was confirmed by the club on its website on Saturday morning.

“Nottingham Forest are delighted to confirm the signing of Nigerian international forward Taiwo Awoniyi for a club-record fee,” the club said on its website.

Awoniyi, who finished last season with Bundesliga side, Union Berlin, and scored 18 goals in all competitions before he joined Steve Cooper’s side, is hoping to help the former European champions cement their place in the top tier of English football after a 23-year absence.

“It’s always been my dream to play in the Premier League and having spoken to Steve Cooper about our ambitions and looking at Forest, with its great history, it’s a club that I want to be part of.”

Cooper revealed Awoniyi was a player the club has been monitoring for some time. “There’s been a lot of interest in Taiwo [Awoniyi] from other Premier League clubs, and other clubs across Europe, so we’re delighted that he’s chosen Nottingham Forest.

“Our recruitment and coaching teams have been monitoring his progress closely over the last few months. He’s a player who we really believe in and we look forward to him going on to fulfill his potential and become a top Premier League striker with Nottingham Forest.”

According to the Italian Sports Journalist Fabrizio Romano, Forest triggered the release clause in Awoniyi’s contract with Union Berlin. “£17m release clause triggered and Liverpool will receive 10% of the transfer. #LFC ”.

Awoniyi was on the books of Liverpool for six years but was farmed out on loan to clubs in Belgium, the Netherlands, and finally to Germany where Union Berlin signed him on a permanent basis last season.

During Awoniyi’s spell with Union Berlin, the striker scored 20 goals in 52 appearances.