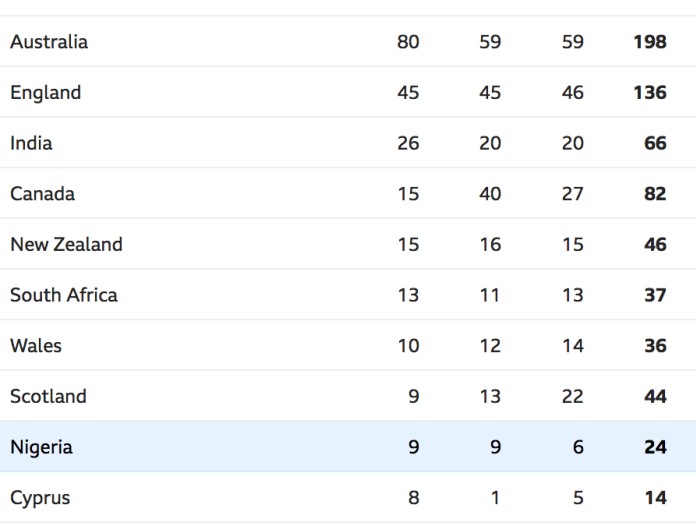 After all activities, the 2018 Commonwealth Games ended yesterday in Gold Coast, Australia. The Team Nigeria which won nine gold, nine silver, and six bronze medals finished in the top ten sitting comfortably in the ninth position on the overall medals table.

The feat though achieved through personal efforts of most Team Nigeria athletes, was a spot below the eighth position occupied at the Glasgow Games four years ago when the team won 11 gold, 11 silver, and 14 bronze medals.

Cameroon who had one silver and two bronze finished in the 32nd position, Mauritius were in joint-34th position with one silver while Ghana and Seychelles who only won one bronze, were joint-39th in the medal table.

Hosts Australia, were the overall winners at this year’s games after amassing 80 gold, 59 silver, 59 bronze to bring their medals total to 198.

Meanwhile, the Sports Minister, Solomon Dalung, commended the team for not just doing the nation proud but better the performance at the last edition in Glasgow. ” I thank you very much for making us proud. We have done a comparative analysis and looked at the size of our contingent when we went to Glasgow. How many sports we competed in and how much money was voted? These are the factors which will confirm whether we have done better here or not. From the average knowledge of what I have, we have done better here than what we did in Glasgow.”

The Minister also announced that arrangements to host those available back in Nigeria have been put in place.

“This will enable us to interface, interact, cross-pollinate ideas and enjoy ourselves. I don’t want us to access our success with medals. We should assess our success by participation and the way we conducted ourselves during the Games.It is also time to begin to invest in our athletes if we want to do well in sports,” he remarked.

The next edition of the Commonwealth Games in 2022, will be hosted in Birmingham, England, from July 27 to August 7.